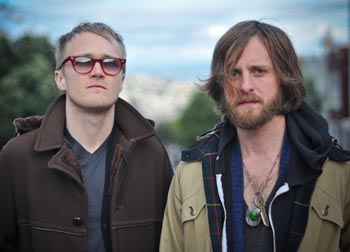 San Francisco-based duo Two Gallants have been playing their earnest, hard-charging rock ’n’ roll since 2004. The name of their band comes from a story in James Joyce’s “Dubliners.” Adam Stephens plays guitar and harmonica and sings; Tyson Vogel handles his share of the vocal chores as he drums. In comparison, their sound is less polished than the slicker White Stripes, and more rock and folk influenced than the bluesy Black Keys. It’s Americana through and through.

The band made the news in 2006 when their show in Houston, Texas, went off the rails. They were headlining a show at a club called Walter’s. After receiving a noise complaint, the Houston Police sent an officer to check it out. The police officer went on stage and told the band to stop playing. The band refused, a fight broke out, and the police officer ending up using his Taser gun on several people, before arresting members of the band.

The group has been relatively quiet since then. Their last self-titled full-length was released in 2007, and they’re currently recording a new record. After playing two nights in San Francisco in September of 2011, they start a tour of East Asia in Cheonan, South Chungcheong, on Wednesday. They’re playing three more nights in Korea (Daegu, Busan and Seoul) before playing six nights in China.

“We have no idea what to expect, other than high adventure and many awkward situations,” the band said via their Web site.

The tour is part of an effort to bring more outside independent acts to Korea. Concert promoter Super Color Super is run by Californian Sean Maylone, who moved to Korea four years ago to teach English. Since then, he’s made a name for his agency by booking well-known indie bands such as Caribou, Das Racist and CocoRosie.

Maylone said the mission of Super Color Super was “to move the concert life of Korea forward: creative events, more international artists of all styles and sizes coming in at lower prices in more cities. Surprisingly, this has been happening bit by bit.”

“I’m a bit inspired by the function of the impresario - straddling the creative side of the art scene and the logistics,” Maylone said. “I think there is starting to be more of a culture around trying new music, and SCS has built a lot of trust so that fans try out artists we bring, so I’m optimistic about these bands becoming more contagious.”