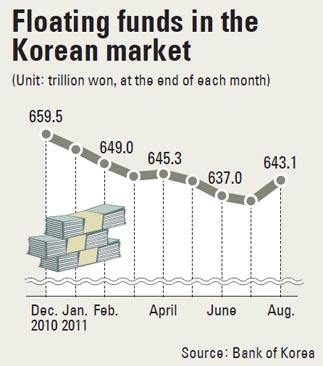 A huge sum of money, estimated at around 643 trillion won ($574 billion) as of the end of August, is floating around the market without a fixed home, the Bank of Korea and the Korea Financial Investment Association announced yesterday.

The news comes as Korea is dealing with a stagnant real estate market and high volatility on its main bourse due to the prolonged sovereign debt crisis in Europe.

As investors question where to put their money in such uncertain times, more are turning to short-term floating funds as a way of prevaricating.

Of these, fixed deposits at major local banks are also shooting up. These rose at their fastest pace in one year last month as safer investments become increasingly attractive given the prevailing sentiment of global uncertainty.

The combined amount of outstanding term deposits at five local banks, including Kookmin and Shinhan, hit 380.5 trillion won in October, up 6.6 trillion won, or 1.8 percent, from the previous month, according to banks’ data. The latest monthly increase is the highest since the same period last year, when it posted a gain of 9.6 trillion won.

Ough Chang-sup, an analyst at Meritz Securities, said that lower deposit rates have not scared off investors as they seek safe havens for their cash.

The surge in overall floating funds comes as local banks have stuck to a conservative line in terms of raising their interest rates, while the country’s real estate market struggles to gain ground.

The average rate for bank deposits stood at 3.71 percent last month, down 0.06 percentage points from the previous month, according to the BOK.

The amount of money free-floating around the local market surged in the wake of the 2008 financial crisis and peaked in December last year at 659.5 trillion won. It then went into a freefall, dropping to 635 trillion won in July before picking up again recently.

“The increase in floating funds shows that investors are putting their money in temporary shelters while they try to figure out where to invest, as the financial markets have frozen up due to the global financial crisis,” said an industry official. “The volume of floating funds is likely to increase.”

Customer deposits jumped from 19.4 trillion won at the end of August to 20.5 trillion won in October. Meanwhile, the volume of money market funds also increased from 55.3 trillion won to 67 trillion won over the same period.

“Once confidence is restored in the financial market, investors will begin investing again, but it seems they will have to wait until next year to find stable investment outlets,” said Yeon Tae-hoon, an official from the Korea Institute of Finance.