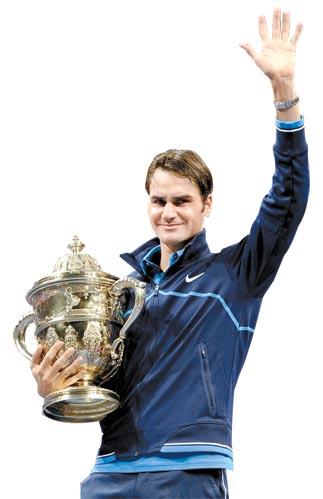 Federer was emotional as he thanked his hometown fans after winning for the fifth time in six years at the event where he once worked as a ballboy.

“It’s always the greatest for me to win the title here. See you next year,’’ he said on the court in Swiss-German.

Federer showed the full range of his shot-making to school the 32nd-ranked Japanese, who stunned top-ranked Novak Djokovic in the semifinals.

“He was too good for me today,’’ said the 21-year-old Nishikori, who described Federer as his ‘idol.’

Federer’s 68th career title was just his second this season.

He won the season-opening event in Doha, Qatar, and had not reached a final since losing in the French Open to Rafael Nadal in June.

Now ranked No. 4 at age 30, Federer was playing his first event as a player ranked outside the top three since he won his first Wimbledon title in 2003.

“It’s been a great week. I got better as the week went on and I saved the best for last,’’ he said.

Nishikori started brightly on his own serve but Federer broke after reeling off three straight winners.

Federer dropped just one point on his own serve in the first set and fired flat ground strokes to all corners of the court.

He repeatedly pressured Nishikori’s serve and took the set on his opponent’s double fault.

Nishikori fended off break point chances to hold serve early in the second, then showed his speed and defensive strengths by outlasting Federer in a long rally. The reprieve was brief and Federer broke again to lead 4-2.

He was serving for the match when Nishikori earned his first breakpoint chance, which Federer saved with a powerful serve.

Federer took his first match point with an overhead smash at the net as Nishikori scurried to field shots deep beyond the baseline.

Nishikori will rise to a career-best ATP ranking around No. 25 on Monday, also the best ever by a Japanese man.

“It has been a long time since I’ve felt so good physically,’’ Federer said. “I’m at a different point in my career to the younger guys, I have to focus on what’s better for my body, my mind, my family and I think it was the right decision.’’

However, Federer won without playing anyone ranked better than No. 15 Andy Roddick of the United States in the quarterfinals.

An injury-hit week saw Djokovic hampered by right shoulder pains against Nishikori, while Britain’s Andy Murray withdrew one hour before his first-round match.