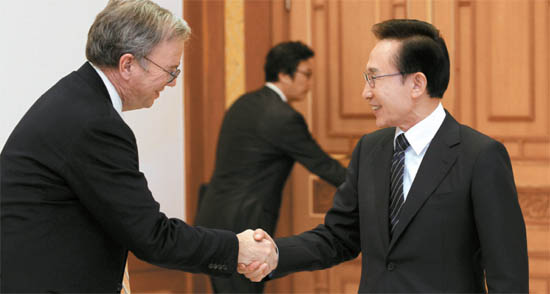 President Lee Myung-bak (right) meets Eric Schmidt, the executive chairman of Google, yesterday afternoon at the Blue House to discuss recent trends and collaboration in the technology sector. Provided by the Blue House

The 56-year-old arrived in the capital yesterday for a three-day trip with a packed itinerary. He was scheduled to hold meetings with the heads of Korean telecommunications companies and electronics giants, as well as senior figures from the Korea Communications Commission, the communications and broadcasting watchdog.

He held separate talks with President Lee Myung-bak and KCC head Choi See-joong, the Blue House and Google said in statements. During these meetings, he proposed offering financial support to and mentoring for investors to boost the industry. He also suggested holding a contest to scout talent and develop new ideas for the software industry. 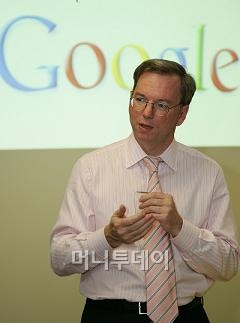 Additionally, Google will establish a YouTube channel exclusively for Korean pop music in an attempt to help spread the Korean Wave, or Hallyu, further overseas, according to the statements.

Lee called for greater cooperation between Google and local firms, saying his government is trying to ramp up creativity in the Internet industry while developing new future growth engines, the Blue House said.

The Korea Go Global project will be executed in stages from early next year, officials said.

Schmidt, who formerly served as Google’s CEO, last visited the country in 2007. In the intervening years, the company’s Korean operations have undergone significant change while global communication trends have taken new turns.

One of the major transitions has been the explosive growth in mobile devices like smartphones and tablets, which has helped Google’s Android platform emerge as the top mobile software platform. Korean mobile phone makers have contributed to Android’s fortunes, with Samsung Electronics ranking as its top vendor.

When Choi asked Schmidt for his opinion on how the smartphone platform war among Google, Apple, Microsoft and other competitors would pan out, he said he did not consider Microsoft to be of the same standard as Android.

“Korea is a huge success for us,” he said.

Later, he also sat down with Lee Suk-chae, the CEO of KT, the country’s No. 2 mobile carrier, and the two talked about potential deals in mobile commerce and advertising. Schmidt also reportedly met with officials of Samsung Electronics and LG Electronics.