Cheonan man back in jail after clerical error

Cheonan man back in jail after clerical error 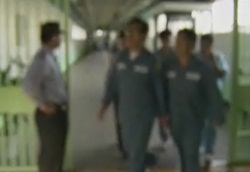 A man who was released from prison six months before the end of his term has been returned to jail to serve out the remainder of his term, all because of a clerical error.

According to Daejeon District Prosecutors’ Office, a 33-year-old man surnamed Hong was imprisoned at Cheonan Prison in South Chungcheong last week after it was discovered his term had been miscalculated. Hong was sentenced to 30 months in jail, but only served 24 months of his term.

Hong is a single father who has been living in Cheonan for the past 15 months supporting his mother and two children.

According to Hong’s brother, a Cheonan Prison official arrived at their home on Wednesday and took Hong to prison the same day.

“We were totally embarrassed,” Hong’s brother, who asked to be identified only by surname, said. “We had no idea how to react to this ridiculous situation. After my brother was gone, I told my nephews that he had to leave the country for work.”

His brother said that after Hong was taken back to prison he went to the factory where Hong worked and asked the manager to give his brother sick leave instead of firing him, but the request was turned down.

“I tried to save my brother’s job so he can work after he gets out of jail,” Hong’s brother said. “He was so happy to be able to support his family, but now it’s all ruined. I have no idea where to file a complaint about this.”

Prosecutors said Hong was sentenced to six months in prison with two years probation for assault in 2007. In September 2008, in the middle of his probation, he was again charged with assault and sentenced to another two years in jail.

“The Supreme Prosecutors Office recently ordered correctional facilities to check for errors in prison terms and the Daejeon facility found one,” a Daejeon District prosecutor said. “It is not illegal to send Hong back to prison, but it is very unfortunate that someone who became a better person on the outside had to go back to jail.”