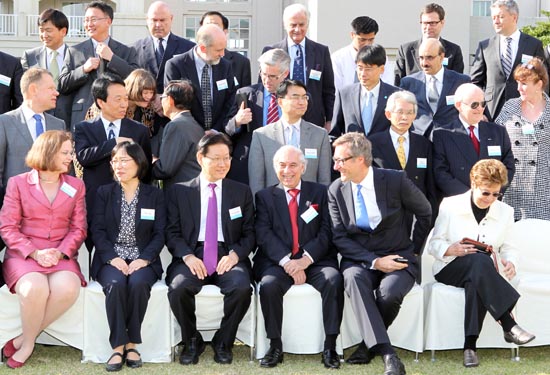 Participants in the 10th annual United Nations-Korea conference on nuclear disarmament and nonproliferation pose for a group photo yesterday at the start of the event at the Shilla Hotel in Jeju. Around 70 global experts from the UN, United States, Britain, Germany, Japan and China attended the conference. [YONHAP]


A joint United Nations-Korea conference on nuclear disarmament and nonproliferation kicked off its 10th annual event in Jeju yesterday, with around 70 global experts from the UN, United States, Britain, Germany, Japan and China participating.

The event, highlighting the growing significance of nuclear security, comes ahead of the Nuclear Security Summit in March, which will be hosted by Seoul.

The two-day conference will cover the progress and challenges in international disarmament and nonproliferation over the past decade and exchange views on newly emerging issues, the Ministry of Foreign Affairs and Trade said.

“Recent years have seen many important developments such as the adoption of the Final Document of the 2010 NPT Review Conference, the conclusion of the New START treaty between the United States and Russia and the initiation of the Nuclear Security Summit,” said Kim Bong-hyun, deputy foreign minister for multilateral and global affairs, in a welcoming speech at the conference.

“However, it is also true that we have many pending issues remaining, namely the deadlock of the Conference on Disarmament and the entry into force of the CTBT [Comprehensive Nuclear-Test-Ban Treaty],” Kim added.

The conference will also address conventional arms control, an area the UN General Assembly has identified as a prerequisite and an important step in disarmament and nonproliferation since 1978. The UN Conference on the Arms Trade Treaty is also slated for next year.

The Nuclear Security Summit in Seoul is also on the conference’s agenda, the ministry said. The conference, according to the ministry, will review progress on commitments made at the inaugural summit in Washington last year and aim to come up with concrete and action-oriented agreements ahead of the Seoul summit.

The conference has been held in Korea annually since 2001, a year after an international workshop on the issue was organized in Jeju to mark Korea’s 10th anniversary of joining the UN. Sergio Duarte, UN high representative for disarmament, said in an opening address that he was both pleased and proud to see the opening of the 10th conference.

“[I’m] pleased because of the vital importance of the issues to be considered and proud because of the fact that we are commemorating a full decade of cooperation between the United Nations and the Republic of Korea in organizing these useful conferences,” he said. “It has been a wise investment of time and effort.”