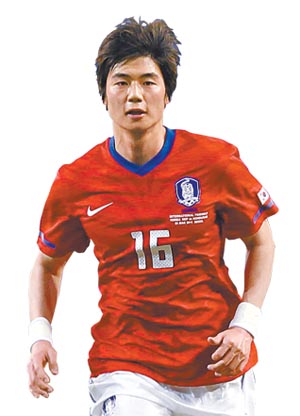 Ki was included in the national team squad that was announced last month for the upcoming third round of the Asian qualifiers for the 2014 World Cup, but a recent sickness has kept the footballer off the pitch. Korea faces the United Arab Emirates on Friday, followed by Lebanon on Nov. 15, both of which will be played away.Ki, who plays for Celtic FC, has suffered from nausea and dizziness as of last Wednesday and has already missed two games for the Scottish club, including its UEFA Europa League match against Stade Rennais of France. The 22-year-old returned to Korea on Sunday for intensive medical inspection to check if he is infected with the enteritis virus.

“Ki went through full medical checkups, but no further negative symptoms were found,” Ki’s management company C2 Global said. “He also completed a blood test, but no viruses were found. He is getting better.”

It was reported that Ki may have come down with a more serious injury as he also received a brain scan, but apparently there were no alarming results. The former FC Seoul player is expected to be released from hospital today.

“The brain checkup was just part of the magnetic resonance imaging,” the agency said. “Since he is getting better, we are discussing with the hospital when he will be released and join the national team.”

Football pundits, however, said that even though Ki is able to join the national team at this moment, it is doubtful that he will actually play since he hasn’t had time to train and recover his form.

The national team, led by coach Cho Kwang-rae, is already in the United Arab Emirates for training and is reportedly hoping Ki will be ready in time for the matchup against Lebanon next week.

Ki has been one of the key players for the national team. He hasn’t missed a single international match since Cho took the coaching job in July of last year. Excluding goalkeeper Jung Sung-ryong, Ki is the only player that has featured in all 19 matches under Cho’s management.

Pundits say that it will be difficult for Cho to fill the void left by Ki, who has also been the main free-kick taker.Midfielders Koo Ja-cheol of Wolfsburg FC and Yoon Bitgaram of Gyeongnam FC may get the nod. Koo, 22, played in Ki’s place during a friendly against Poland last month.