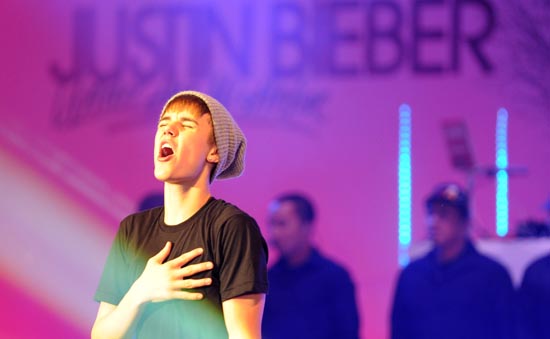 ATLANTA - Justin Bieber will take a paternity test and then he plans to sue the woman who has filed a paternity suit against him, a representative for the teen pop star said Monday.

Matthew Hiltzik said the 17-year-old singer will take a paternity test when he returns to the United States within the next two weeks. He also said Bieber’s team plans to “vigorously pursue all available legal remedies to protect Justin.’’

Mariah Yeater filed the paternity suit last week in the San Diego Superior Court. She said she had just turned 19 when she and Bieber, then 16, had a brief sexual encounter after one of the singer’s concerts last fall in a backstage bathroom at the Staples Center in Los Angeles.

The singer was in London on Monday to switch on the Christmas lights at the city’s two biggest shopping malls. Thousands of young and mostly female fans waited hours for Bieber to appear. Bieber traveled the 12 miles between the malls by helicopter.