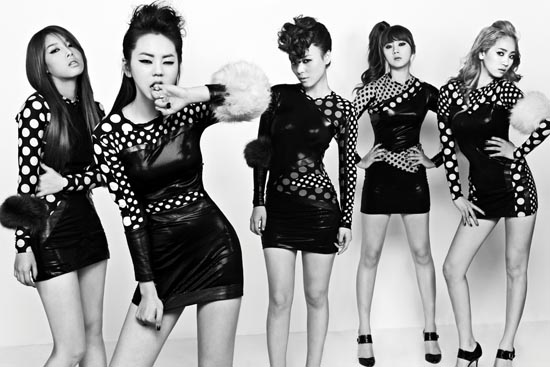 The Wonder Girls - from left, Yubin, Sohee, Sunye, Hyerim and Yeeun - are back in Korea to promote their new album “Wonder World.” Provided by JYP Entertainment


The Wonder Girls’ new album “Wonder World” hit stores on Monday and it’s already headed for the top of the charts.

The lead single “Be My Baby” instantly topped online charts, including Bugs Music, Cyworld, Daum, Melon, Mnet, Naver and Soribada. Most of the 12 other songs on the new album are ranked high on the charts as well.

“Be My Baby” was written and composed by Park Jin-young, CEO of JYP Entertainment, the group’s management agency, and adds a more modern tempo to a ’60s pop soul sound. In the video, the music meshes nicely with the lively choreography by Jonte, who is also Beyonce’s choreographer.

The girls made an emotional appearance at a press conference to promote the album on Friday at a hotel in Gangnam District, southern Seoul.

After being asked whether she wanted to just enjoy college life like a regular student, group member Yubin, 23, burst into tears.

“I want to continue my studies, but being a singer is the path I’ve chosen,” she said, as tears began to fall. “There’s a lot to learn in this field, too.”

Her words prompted a similar reaction from Yeeun, 22, who was sitting next to Yubin and started to tear up as Yubin was talking.

The outpouring of emotion is possibly indicative of the pressure the group has faced since leaving Korea a year and a half ago to try their luck in the competitive U.S. market.

In June 2009, after reaching the top of the charts with their song “Nobody,” the group declared they were off for the United States. That October, the song entered Billboard’s Hot 100 chart at No. 76, making the group the first from Korea to enter the chart.

Although they have accomplished a lot overseas, the group has been absent from the local music scene and Yeeun said they are worried about how they will be received.

“We’ve been worried about returning to the Korean stage since it’s been so long since our last performance here,” Yeeun said. “But after we decided to show our true identity, we focused on creating simple melodies and choreography that people could easily follow.”

The youngest in the group, Sohee, 19, talked about being back before the media.

“We didn’t have many broadcast opportunities in the States, so being in front of the cameras again makes us nervous,” Sohee said. “But I’m excited to be back on stage in Korea and to see my family again.”

After promoting the album in Korea for a month, the Wonder Girls plan to return to the United States. In January 2012, they will star in the television special “Wonder Girls at the Apollo” on U.S. cable channel Teen Nick. They also plan to release an album based on the movie soundtrack.

The group said it is looking forward to building a stronger base in the United States.

“Our career in America is still a work in progress,” Sunye said. “We’re gaining valuable experiences we never would have had if we stayed in Korea and our desire to achieve something there is stronger than ever.”

The Wonder Girls rose to stardom after the release of “Tell Me” in 2007, when girl groups such as Kara and Girls’ Generation were also rising.

As it happens, Girls’ Generation is currently performing in Korea with their newly released album “The Boys,” giving The Wonder Girls some heavy competition. But the girls seem to welcome the rivalry.

“As we both sing and dance, the relationship between Girls’ Generation and us is more encouraging than threatening,” Yubin said.