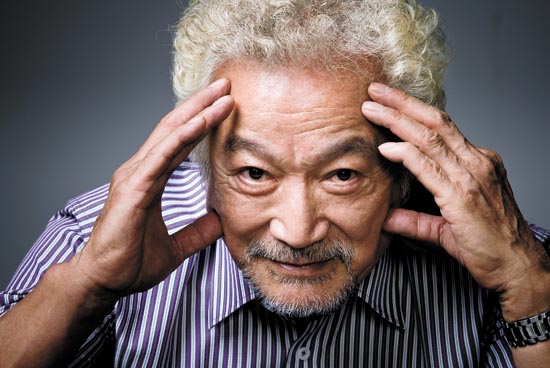 
Since cultivating an image as Korea’s James Dean, known for his teen-idol looks and rebellious spirit, Shin Sung-yill has led a turbulent life. He shot to stardom after debuting in a romantic movie in 1960 and appeared in more than 500 films. From the 1960s to the late 1980s, the so-called golden age of Korean cinema, Shin found himself paired on the silver screen with no fewer than 120 Korean starlets, and chose leading actress Eom Aeng-ran as his wife in 1964.

Not satisfied with the bounty of fame, wealth and women in his life, however, he ventured into politics and was elected to the National Assembly in 2000 at the age of 63. This led to his fall from grace and a prison term of two years and five months in 2005 for accepting bribes after he had become embroiled in a string of scandals.

Over the past seven months, Shin has been sharing his thoughts on life, love and numerous behind-the-scenes episodes in the movie-making world with JoongAng Ilbo readers in the form of a daily column that wrapped up recently with his more than 137 contributions.

Shin explained in detail how he became a leading actor of his era and discussed his personal relationships with politicians, industry leaders and other power players including former President Park Chung Hee. Other accounts deal with women with whom he was romantically linked.

To celebrate the end of his often engaging and enlightening column, the JoongAng Ilbo met up with Shin, whose name is synonymous with the history of Korean filmmaking, and asked him to reflect on what effect the column had on him. One of his first comments was that he felt like he had just finished shooting the last scene of a “good film.”

Here are some excerpts from the interview with Shin, who also talks about his current girlfriend and how he cannot live without love even at the age of 74. Shin said that these days he spends much time reading and raising his seven Pungsan dogs.


Q. The columns dealt with a number of sensitive issues. You talked about many celebrities and used their real names. Was there any backlash?

A. Kim Hong-shin, a friend of mine who is a writer and who used to serve as a politician, called me and said the column was fun but a little dangerous. I also got a call from the former manager of singer Cho Young-nam. He told me that he never knelt in front of me [as Shin wrote].

I think we have a different memory of this incident. I also expected to receive calls from actresses who were mentioned a couple of times in my columns, but none of them contacted me. I guess that’s because I write the columns based on fact.

What was your wife’s reaction to your decision to air the secrets of your storied love life, including your first affair after tying the knot?

She’s very smart. We have been able to live together and share the limelight for almost five decades because we consider each other a partner. We live in different apartments, about a kilometer apart, but we still eat and take trips together.

We respect each other when it comes to our love life and other issues. I think we’re setting a new ideal of married life. [Shin has three homes: in Seoul, Daegu and Yeongcheon, North Gyeongsang.]

Were you expecting the revelation of your relationship with President Park Chung Hee to become the talk of the town?

[What surprised me was that] my wife and I lent our full support to [Representative and former GNP Chairwoman] Park Geun-hye when she ran for the 1998 by-election in Dalseong County, Daegu, because we received so much help from former President Park [Geun-hye’s father].

We treated her like our own sister during the campaign period, but she never suggested we get together for dinner and also gave her own sister the cold shoulder when she visited the campaign site. I was surprised by how cold she was.

Why did you bring up stories about famous politicians like Kim Jong-pil and Posco founder Park Tae-joon?

All these episodes were always in my heart but I feel good after I spat them out. Everyone has their own stories to tell, but they keep quiet to avoid taking responsibility for certain things. For this reason, some people or facts are not properly assessed. I tried to correct views of those people or situations that had been overly praised or criticized.

If you had to pick one of your columns, which one would it be?

The one where I recalled Gwangju in 1980 when [the nation] was controlled by the regime of Chun Doo-hwan. Re-reading the column was a hair-raising experience. Already 30 years have passed after the Gwangju democratization movement, but I still find what happened heart-wrenching.

Who was, for you, the most memorable figure in the filmmaking fraternity?

Of course, director Lee Man-hee. He was a genius. I’m so sad because he died at such an early age. If he could have lived for a few more years, Korean film history would be dramatically different. [Lee died of cirrhosis of the liver at 44.]

How did you survive your ordeals as a politician?

I was a leading actor when I was young, so I wasn’t afraid of powerful people. And I didn’t compromise with those who I thought were wrong. My philosophy was always to be hard on myself but soft on others.

What is your secret to staying in shape?

My wife told me she decided to marry me when she saw my trapezius muscles. Back in prison, I always worked out. If you stop working out, your spirit also dies.

What didn’t you write in your columns?

My book based on them will be published next month. ... I hope to include more details of my love affair with Kim Young-ae.