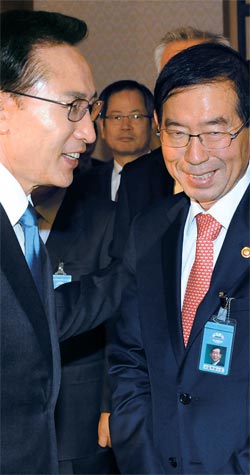 President Lee Myung-bak had his first face-to-face encounter with new Seoul Mayor Park Won-soon during a cabinet meeting yesterday, a day after Park came out against Lee’s push to ratify the free trade agreement with the United States.

Park, who was elected with support from the main opposition Democratic Party, said Monday that he opposed the trade pact and urged the government to reconsider a contentious provision in the deal, an unusual move by a local government official.

Park’s opposition came as Lee has been stepping up efforts to pass the pact through the National Assembly after the U.S. Congress ratified it during his state visit to Washington last month. Opposition parties are against the accord, claiming it favors the United States.

Yesterday, Lee and Park greeted each other with smiles and handshakes at a cabinet meeting. It was their first face-to-face meeting since Park’s election. Seoul’s mayor is not a cabinet member but usually attends the meetings.

Ahead of the cabinet session, Lee and Park exchanged pleasantries, recalling the times when Lee was Seoul’s mayor and Park was a lawyer-turned-activist, and how they worked together. However, the free trade agreement did not come up as a topic.