The works are from the collection of Francois Pinault, a major shareholder in Christie’s auction house and founder of business group PPR, which has as subsidiaries luxury brands such as Gucci. 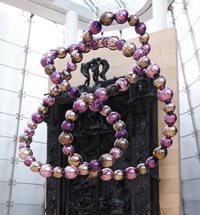 Othoniel is known for his glass works, including a permanent installation at the Palais Royal - Musee du Louvre metro station in the French capital that he designed in 2000 to commemorate the metro’s centenary.

Deoksugung Annex of the National Museum of Art, Jung District

Ranging from video, installation and multimedia art, the works “demonstrate the artists’ interest in translating into art elements of their everyday lives, their social surroundings and the communication between individuals and societies,” the museum said.

For example, Cuban artist Pardo’s “Bulgogi” is a circular drawing room filled with furniture and decorations that he feels are Korean, based on his contact with the Korean community in Los Angeles. Ironically, this work does not feel very Korean to Koreans.

A performance by artist Yeesockyung, traditional dancer Lee Jeong-hwa and others will be held at 6 p.m. on Dec. 1.