Art of the sublime, vibrating into infinity

Art of the sublime, vibrating into infinity

Byoungho Kim’s solo show “A System,” which starts today at Arario Seoul Samcheong could be one of the few recent contemporary art shows in Seoul to give viewers the “feeling of the sublime.”

Visitors to the gallery, located in the Bukchon art district east of Gyeongbok Palace, will first encounter a metal sculpture with multiple wings that look like the teeth of a comb. The sculpture, “Irreversible Damage,” makes unceasing electric sounds “just like screaming,” according to the artist. The sounds dramatically match the stretching shapes and the sharp ends of the wings, grating on viewers’ nerves.

But viewers’ attention will be soon drawn by an installation titled “Soft Crash” on the wall. The work looks like an exploding star with silver white rays of light or a giant dandelion seed. It seems to extend toward immensity, going beyond the visible space that its physical body occupies. Simple electric sounds, emanating from the center of the work, increase this impression.

From this work, viewers might feel “pain in the failure to attempt to imagine what it cannot and simultaneous pleasure in contemplating the immensity of the attempt,” as Kant wrote about the feeling of being in the presence of the sublime in his “Critique of Pure Reason.”

“I’ve always been interested in energy and visual images in styles that extend energy, not compress it,” Kim said during a press preview of the show late last week. “I use sound in my works to enhance the quality of extension.”

“Though Kim’s works are sculptures with solid surfaces, their flowing shapes, which stretch toward clear directions, and sounds make the images that certain forms of energy once stayed and flow again,” Arario said in a press release. 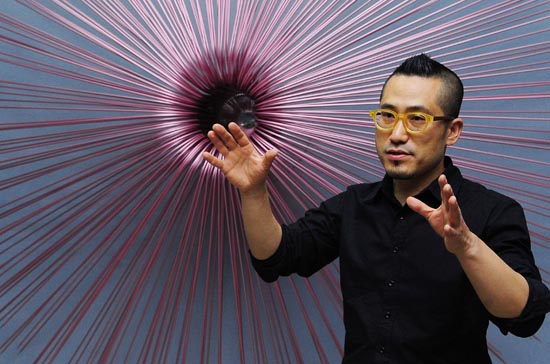 Kim talks about his art in front of his work “A Memory of the Rule.” [NEWSIS]


The 37-year-old majored in fine art at Hongik University and earned a master’s degree in engineering technology art at ChungAng University.

He makes designs and blueprints of his works and then has engineers manufacture the parts. Sounds are created by electric vibrations of the printed electric circuit boards installed in the center of the art works, according to the artist.

“My goal is to make objects with extending qualities,” Kim said. “To accomplish that, I not only use sounds, I will also use movement and other elements.”