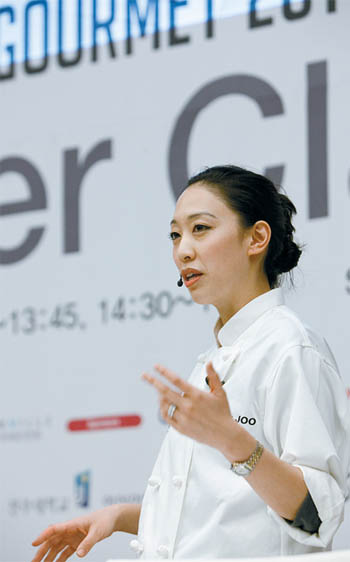 After several years on the trading floor of Morgan Stanley, Judy Joo decided to ditch Wall Street, to the horror of her parents, to do a career 180 as a chef.

“My mom was freaking out!” said Joo, inside a bus taking her and other world-renowned chefs to Jeonju, North Jeolla, last Monday, as a part of a culinary tour to discover Korean food ingredients organized by Seoul Gourmet 2011, an annual local food festival.

“She thought it [cooking] was just going to be a hobby and that I wasn’t really going to take it too seriously,” she said during a one-on-one interview with the Korea JoongAng Daily that day.

The decision led her to enroll in the French Culinary Institute in New York, followed by a brief stint in the renowned Saveur magazine’s test kitchen, where she helped develop new recipes and wrote feature articles for the publication.

In 2005, Joo left New York for London, where she currently lives with her husband, a former co-worker at Morgan Stanley. A few weeks into her new life there, Joo struck upon a chance of a lifetime during a casual dinner with a girlfriend at London’s Restaurant Gordon Ramsay, a three-Michelin-star restaurant owned and operated by the star chef himself.

“We were just eating and he [Gordon Ramsay] was going around to all the tables and talking to everyone. He just said, ‘I heard you are a chef, when are you going to come and work for me?’ So I called him the next day and came in for a trial,” Joo said.

The restaurant was the first in her career as a professional chef and she was there for two and a half years. She has since worked for other internationally acclaimed restaurants, including The Fat Duck and Maze.

“When opportunity knocks, you have to take it,” she said.

The self-proclaimed “geeky” daughter of Korean immigrants in New Jersey is now the face of modern Korean cuisine in the U.K. after she appeared in the cooking competition show “Iron Chef UK” last year on Channel 4.

“It was the most stressful thing I’ve ever done in my whole life, honestly,” she said, speaking about her experience on the hit TV show.

“Cooking that many things in one hour ... that one hour goes by in five minutes and you are drenched in sweat afterwards.”

A foie gras dish using plum-wine jelly and persimmon puree made by Judy Joo during a Master Class at the Seoul Gourmet 2011 food festival, left, and a grilled tuna dish with sesame seeds and doenjang (soybean paste), also by the chef, right. Provided by Seoul Gourmet


Along with the Iron Chef title, Joo is also the executive chef at the Playboy Club London, which reopened this year. There, the chef said she incorporates Korean elements to the otherwise, burgers-and-steak “big boy” menus, from a kimchi taco with bulgogi, marinated beef, to a version of bossam, or boiled, sliced pork, and japchae, stir-fried noodles with mixed vegetables.

Despite her initial disapproval, the chef said her mother is still her biggest inspiration inside the kitchen.

“My parents, when they immigrated to the U.S., moved to a very white part of New Jersey, so there were no other Koreans or Asian people around for that matter. There was no Korean market - only a small Chinese one,” she said.

“My mother really had to make everything from scratch to get a taste of home. So she made her own kimchi, gim [dried seaweed]. We also had a garden where my mom used to grow ggaennip [perilla leaf].”

“They are both really male-dominated industries to this day, and it’s really high stress. You work crazy hours and it’s both physically and emotionally demanding,” she said. “I think it’s harder for women to achieve a work-life balance in these industries for some reason, but you are seeing more and more women in these fields these days. Even now, I am the only woman in the kitchen at my restaurant.”

Throughout her career changes and relocating, Joo credits the hard-working esthetic she adapted from her immigrant parents with propelling her to success.

“My parents always worked really hard, and I always saw them working really hard to achieve the American dream. I think Koreans in America are one of the few minorities that have been able to kind of progress so much in one generation,” she said.

“I don’t regret anything I’ve done. I learned so much when I was in finance and studying engineering at Columbia University. My experiences molded me and have a lot to do with my success now.”

Q. You’ve said that your love of Korean food stems from your mother. What were your favorite dishes from her growing up?

A. This generation is slowly learning not to cook but back then, in my mom’s generation, you had to cook, as a woman. I really like her jjigae [spicy soup], mandoo [Korean dumplings] and haemul pajeon [seafood pancake]. I had a mixture of Western and Korean food growing up, but my favorite stuff was always Korean food.

Did you consider becoming a chef when you were a child?

It never occurred to me during my childhood to pursue cooking because it was drilled into my head as a kid that I had to go to some ridiculous, Ivy League school, and you don’t really become a chef when you do that. I went to engineering school at Columbia University and decided I didn’t like it enough to go into it. But when I was at Columbia in New York, everybody ended up going into finance, Wall Street or consulting, so I just followed the paths of my classmates and just ended up going into fixed income derivatives.

So when did you decide to quit your job at Morgan Stanley?

I was thinking about quitting for about a year. In my free time, I forced myself to read all the Barron’s and The Economist types of publications, but I always just wanted to read cook books and cooking magazines. I just decided at one point that I would pursue my passion and enrolled in cooking school, graduating in 2004.

Which is harder? Being a trader on Wall Street or heading a kitchen?

It’s different. Cooking is more creative than the finance sector, and in some ways, I think being in charge of a kitchen is a little bit harder because it’s subjective and you are at the mercy of food critics and people’s opinions. Somebody’s always going to hate it and say something negative, whereas in finance, it’s more black and white - either you make money or you don’t. In the kitchen, you work crazy hours and really long weeks and you are on your feet a lot, so it’s physically demanding. The trading floor is emotionally and mentally demanding - really high stress.

Tell me about the Playboy Club and managing Playboy bunnies.

The Playboy Club is a global, iconic brand, and they’ve recently re-launched all of the clubs and put effort in redirecting all the business strategy into reinventing the old Playboy Clubs. London was and is the flagship brand and a very iconic club in the 1960s and 1970s. You know, the man who owned it was the richest man in town, and it was all about elegance, sophistication and glamour.

What is your restaurant’s menu like at the Playboy Club?

I’ve taken a lot of influences from everywhere. The Playboy brand is obviously an American brand and we wanted to stay true to that to some extent, and with that came a menu that is heavily grounded in steaks, meat and burgers and kind of big-boy food.

But at the same time, we are making kimchi from scratch there as well. On the menu, there is a kimchi taco with bulgogi [marinated beef], japchae [stir-fried noodles with mixed vegetables], a version of bossam [boiled pork]. And on some of the specials, I’ve done a version of galbijjim [steamed short ribs], so there are lots of Korean elements on the menu.

Did any of your experience in the finance sector, in a way, help you inside a kitchen?

I think my whole pressure level is slightly skewed from when I was working on the trading floor. At the end of the day, I was in charge of billion dollar foreign exchange trades. If somebody gets their dessert two minutes late, it’s OK. It’s not going to cause the economy to collapse and cycle into something much larger.

A lesson for life is that no matter what you want to pursue, it’s important to get an education and to have good communication skills. I think that is part of the reason why I’ve been able to be somewhat successful in my career change. I was able to bring all these other skills that aren’t always there to an industry that doesn’t usually groom people in the same way that finance does.

What kind of voice do you think you offer to the culinary world as a Korean-American woman?

You can ask both my chefs [who came with Joo to Korea for the Seoul Gourmet 2011 festival], actually. Before they came here, I don’t even know if they knew where Korea was on the map. But Andy, my head chef, really likes kimchi - he’s always eating it. I was the first and still the only person cooking Korean cuisine on television in the U.K. People still don’t have a strong awareness of Korea or its culture, so I’m trying to help create an awareness about it.

I think I’m breaking stereotypes also because Asian women are considered to be quite quiet and sometimes submissive, and there is a general kind of feeling that it’s still very much a man’s world in the kitchen. So actually being able to speak your mind and bossing people around [laughs] is different for an Asian woman on TV. I’m not playing the violin or piano - I’m doing something really different.

Do you have a cooking philosophy?

I would say cooking really has no rules, no boundaries. Even the simplest foods can be elevated to an exquisite level. When I was at Saveur magazine, I wrote about boricha [Korean barley tea] and invented a boricha bread. It has a nice, roasted flavor and gorgeous smell to it and so I infused it into rye sourdough. Something as common place in Korea, as boring as boricha, can be elevated.

Why has it taken so long for Korean food to be recognized globally, compared to other Asian cuisines including Japanese and Chinese?

I think some Korean food could go over extremely well.

Haemul pajeon, all the savory pancakes and noodle dishes, as well as the soup dishes, including seolleongtang [ox bone stew] and samgyetang [chicken ginseng soup] with rich, deep broths, we do in Korea are fantastic.

I think some of the jjigae may be scary. Doenjang jjigae [soybean paste soup] may be a bit too much.

The big problem is that there is no standard romanization of the language, so people get confused. You can see kimchi spelled six different ways, and there is a tendency for Koreans to just make it easier for Western people and say, oh just call it spicy paste instead of actually calling it by it’s name.

I think there is huge potential for Korean food to globalize, and we should just ride the wave that Japan and China have created because we share a lot of the same ingredients, so therefore people are somewhat familiar with the ingredients of Korea and some of the flavors.