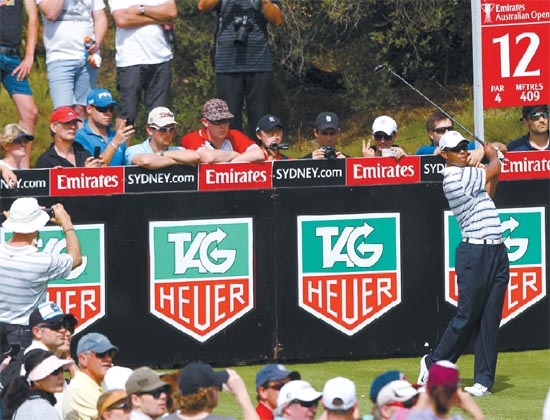 U.S. golfer Tiger Woods tees off on the 12th during a pro-am event of the Australian Open golf tournament in Sydney yesterday. [AP/YONHAP]


SYDNEY - Adam Scott said yesterday he can claim the world No. 1 spot over the next year with the field levelled by Tiger Woods’ slide down the rankings after a two-year failure to win a tournament.

The pair headline a strong lineup for today’s Australian Open at The Lakes course in Sydney, with former world No. 1 Woods keen to build momentum after slipping out of golf’s top 50 for the first time in 15 years.

Australian Scott, ranked eighth, senses an opportunity to press for the top spot, held by Englishman Luke Donald, with the once-unassailable Woods searching for a return to winning golf and a rise from his ranking of 58th.

“I’m not that far away,” Scott said. “I know Luke Donald’s got a pretty good lead on number two [Rory McIlroy] at the moment so I am sitting at number eight and with consistent play over the next year I believe number one is certainly attainable.”

“It is really the first time in my career as a professional that it’s been realistic for me because for seven, eight, nine years no one played at the level Tiger played at for that period of time to be able to be number one.

“He’s [Woods] slightly off but he’s on his way back it seems, so it’s a good time for me to take advantage of that and hopefully beat him to the punch.”

Adding spice to the duel is the appearance of caddie Steve Williams, who was Woods’ bagman for 13 of his 14 major titles before being sacked earlier this year and hitching up with Scott.

Williams triggered outrage when he referred to his former boss Woods as a “black a------” during an awards dinner on Friday night in Shanghai.

Woods said Williams had apologized to him for the comments when they met at the Sydney course on Tuesday adding that while the remarks were hurtful his ex-caddie was not a racist.

Scott won the Australian Open two years ago and was runner-up at this year’s U.S. Masters before winning the World Golf Championship Bridgestone Invitational with Williams carrying his bag.

Woods, who has not won since the 2009 Australian Masters in Melbourne, is looking for a flow of tournament play to regain his touch after a year blighted by injury.

“I think I need tournament time,” he said. “I haven’t played a lot of tournaments this year and I’ve missed pretty much the entire [northern] summer.”

“I’ve got three coming up, I play here, the President’s Cup [next week at Royal Melbourne] and Chevron, then we have a little bit of a lull before the start of next season.”

Woods is confident he will begin climbing the world rankings with no points to defend next year.

Tournament victories accrue points which are lost by failures to replicate performances, and Woods’ drop in form has seen him dive down the rankings.

“I had a really good year in 2009 where I think I won six or seven tournaments around the world, so those points all came off this year and I didn’t make any points back,” he said.

“So next year’s going to be a fun year because basically I have nothing but positive gains next year and by playing well and winning tournaments I will climb the world rankings.”

Woods will play the opening two rounds at the Australian Open with 23-year-old Australian Jason Day, the world number seven, who was runner-up at this year’s U.S. Masters and U.S. Open.