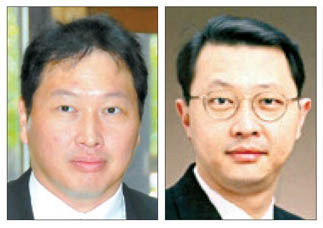 Prosecutors yesterday raided the headquarters of SK Group, the nation’s third-largest conglomerate, to investigate allegations that its chairman, Chey Tae-won, 50, embezzled hundreds of billions of won in company funds for personal purposes including risky futures investments.

About 20 prosecutors from the Seoul Central District Prosecutors’ Office confiscated accounting books and transaction records from the headquarters and some of its affiliates, such as SK Holdings Co. and SK Gas Co.

According to prosecution sources, prosecutors also wrote in the raid warrant that Chey Jae-won, Chey’s younger brother and vice chairman of SK Group, might have also embezzled as much as 265 billion won.

According to prosecutors, SK Group’s 18 affiliates have invested a total of 280 billion won in Kim’s investment firm, which was founded in 2006, raising suspicion that the company is a sort of “ghost affiliate” of SK Group. Kim was a close aide to Chey and was promoted to executive director of the group in just three years after joining the conglomerate in 1998.

Citing an audit by the National Tax Service, prosecutors said that Chey invested in futures beginning in 2008, when the global recession hit, and lost billions of won in investments.

It is not yet known how much Chey lost from his futures investments. When the chairman sold 4 percent of his shares in SK C&C in September, worth about 280 billion won, rumors swirled that Chey seemed to have lost about 300 billion won. Prosecutors suspect that Chey pocketed the group’s money that was invested in Kim’s company to purchase futures or make up for his losses afterward.

On April 30, Chey told reporters that his investment losses came from his personal fortune, denying that he used the group’s funds.

It is not the first time that SK Group has been embroiled by embezzlement allegations. Son Kil-seung, its former chairman, was convicted in 2003 of using 780 billion won from SK Shipping Co. to purchase foreign futures. SK Group yesterday officially denied the allegation that Chey had embezzled company money.

“It’s not true that Chairman Chey misappropriated the group’s investment funds for other purposes,” a SK Group official told Yonhap News Agency yesterday. “He didn’t make up for his loss from purchasing futures by pocketing money from the group’s affiliates or raising slush funds. We will cooperate with prosecutors so that all suspicions can be cleared.”

The younger Chey is also under investigation for suspicion that he overstated the expenses of three of the group’s subsidiaries to raise slush funds. The subsidiaries also received illegal loans from Samhwa Savings Bank, which the government shut down in January.

Related to the ongoing investigation, the Seoul Central District Prosecutors’ Office yesterday also raided the Seoul Regional Tax Office on suspicions that the head of the office, Lee Hui-wan, 62, received a total of 3 billion won from SK Group affiliates for what was listed as “consulting.”

Prosecutors said SK affiliates paid Lee 50 million won every month in “consulting fees” until October 2010, even though Lee retired in June 2006. Prosecutors suspect that Lee allowed SK to evade tax inspection and received the money as a bribe after his retirement.