Ki Sung-yueng out for match, Hong to fill in

Ki Sung-yueng out for match, Hong to fill in 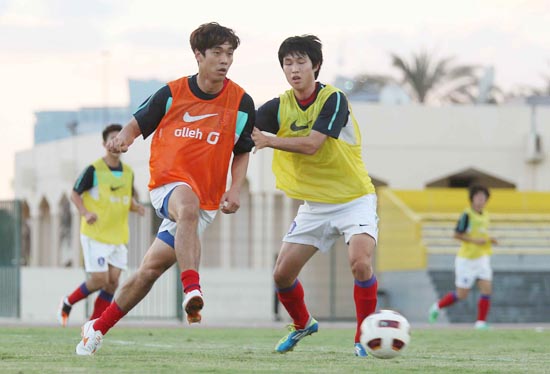 
The Korean national football team will play its upcoming World Cup regional qualifiers without Ki Sung-yueng, as coach Cho Kwang-rae decided not to call up the midfielder who has been showing symptoms of enteritis.

Ki, who plays for Scottish club Celtic FC, has been nauseous and dizzy since last week. He was hospitalized on Sunday for an intensive medical check up.

The doctor’s results turned out to be nothing alarming, but Cho decided not to bring the 22-year-old to the Middle East where the national team faces the United Arab Emirates tonight and Lebanon next Tuesday in the third round of Asian qualifiers for the 2014 World Cup.

“Ki’s condition is still not good enough to play,” Cho said to local reporters in Dubai on Wednesday. “He hasn’t trained for more than 10 days and it could worsen his condition [if he travels].”

Excluding goalkeeper Jung Sung-ryong, Ki is the only player who has played in all 19 matches since Cho took the coaching job in July of last year. It is reported that Ki will stay in the hospital for a day or two before going to his hometown of Gwangju.

To minimize Ki’s absence, Cho said he will shift Jeju United center back Hong Jeong-ho and pair him up with Suwon Samsung Bluewings workhorse Lee Yong-rae to strengthen the defensive aspect of the midfield. Hong, 22, played defensive midfielder for Cho’s team in the Asian Cup semifinals in January when they played Japan.

“I’m still adjusting to the position, but I know what my role is,” Hong said after training on Wednesday. “I will not be a burden to my other teammates.” 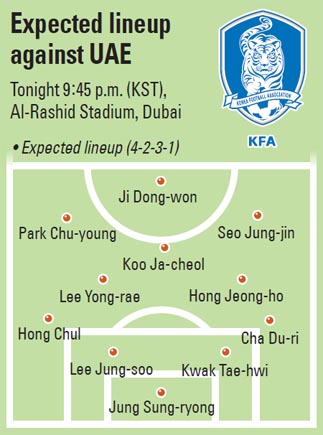 Koo Ja-cheol was a strong candidate to take over Ki’s role, but Cho said he will play as an attacking midfielder to support the strikers. The 22-year-old, who is one of 10 candidates for the Asian Football Confederation’s Player of the Year, has played almost every position in the midfield, including both flanks.

“We need to play better since Ki is out,” said Koo, who plays for the German club Wolfsburg, to Yonhap News Agency. “It’s a match where we need a victory. I’m thinking a lot about how to contribute to the team.”

Since Hong has moved up to the midfield, Cho said Ulsan Hyundai defender Kwak Tae-hwi will play as a center back and pair with Lee Jung-soo, who last week won the AFC Champions League with Qatari club Al Saad.

“Kwak and Lee are good partners since they’ve played together in the past,” the 57-year-old coach said. “It will empower our center defense to contain UAE, who typically try to penetrate the center.”

The national team will welcome the return of Ki’s teammate Cha Du-ri who is the most experienced player on the roster with 63 international matches. The veteran right back missed the last two qualifiers due to a thigh injury, but is expected to bring dynamic energy to the defense with his powerful play.

“A veteran’s role is to stabilize the defense and lead the young players,” said Cha. “I heard Korean fans were disappointed with the last two games, but this time we’re ready to perform.”

Another veteran, Park Chu-young, who is the second most experienced player with 56 international matches, will lead the team’s attack. The 26-year-old Arsenal striker has scored seven goals in his last four matches for Korea.

Park, who is also captain of the team, has so far bagged 22 goals at the international level, 10 of them against teams from the Middle East. He scored against the UAE in two previous encounters.

Park will form the attacking lineup along with Sunderland forward Ji Dong-won, who is expected to be frequently switching positions with Park during the game. The right wing position is still up for grabs between Jeonbuk Hyundai Motors’ Seo Jung-jin, who marked three assists in the last two matches for Korea, and Son Heung-min who plays for German club Hamburg.

Cho said he will present a better performance and make it to the final round of the Asian qualifiers by winning the two matches in the Middle East. He said balancing between defense and offense will be the key.

Korea is currently the leader in Group B with seven points, followed by Kuwait, Lebanon and UAE. The Taeguk Warriors have a better head-to-head record against UAE, leading by 10 wins, five draws and two losses.