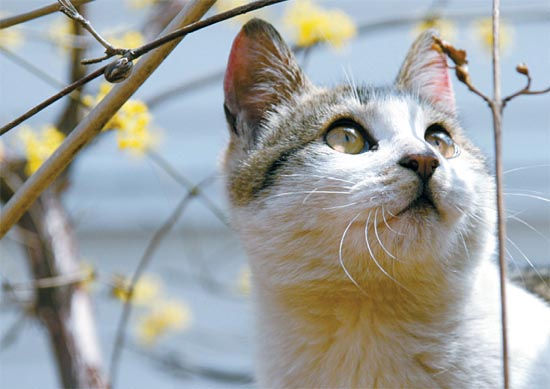 Through humorous and touching scenes showing cats struggling to survive, the documentary “Dancing Cat” is certain to diminish the negative image of stray cats in Korea. Provided by Indie Story


Cats are the subject of a new documentary that is likely to change how the animals are seen in a country that has traditionally regarded them with suspicion.

And that is exactly what “Dancing Cats” director Yoon Gi-hyung and writer Lee Yong-han said that they were aiming to do when they set out to make the film.

Although an increasing number of young people keep felines as pets, many older people tend to fear cats because of their belief that cats are mysterious creatures.

“If even one person had a different point of view about stray cats [after seeing the film], I’d be happy with that,” Lee said.

The two men came to appreciate the felines in very different ways.

Lee, a professional poet who also describes himself as a traveler, said he became interested in the animals after observing a stray cat family one night three years ago. He started photographing and writing about the animals and would upload the content to his blog. These days, instead of writing and traveling, feeding and observing stray cats around his village has become part of Lee’s daily routine.

His blog has since made him famous and some of the material was published in the book, “Hello and Thank You Stray Cats,” which has sold more than 35,000 copies since its publication in 2009.

One of the copies was picked up by Yoon, who works as a television commercial director, in the autumn of 2009.

“At first I sympathized with the author, who said he had no interest in cats at all,” Yoon told reporters during a press screening event at Wangsimni CGV in eastern Seoul last week. 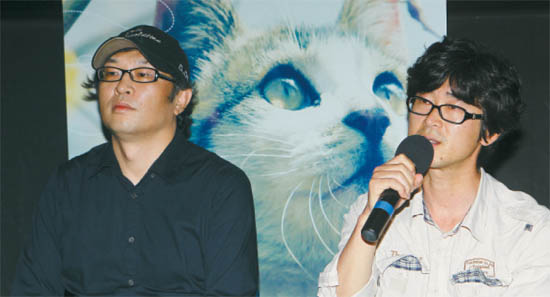 Before they made “Dancing Cat,” neither Yoon Gi-hyung, left, the director, nor Lee Yong-han, a self-described poet-traveler, were interested in cats but both said that they developed an affinity for them through repeated interactions with the animals. [YONHAP]


After he had finished the book, Yoon said he had completely changed his mind on the subject and met with Lee to talk about the possibility of turning the book into a movie.

Yoon originally conceived the project as a 20-minute short with photos of Lee, but said that after deciding to incorporate more material he spent about a year and a half filming stray cats around his place with his camcorder.

The film alternates between the two men’s creations, with interludes of animation and indie music in between. The structure is simple but the film is entertaining, informative and even touching.

As we see the two men’s interactions with the cats develop, we also gain insight into the animals’ behavior. Some of the more entertaining shots show the cats playing with plastic bags, while more moving scenes show them delivering and nursing their young or feeding on chicken bones (this cat was later adopted by Lee). Through it all, we also witness the cats’ struggle to survive and, when they lose this battle, the lonely deaths they die in the middle of the streets.

“The film started with a simple question,” said Yoon. “Pets are raised by human owners and other animals are kept at zoos but stray cats live on their own [in the city], and I wanted to know how they went about their lives.”

The film is not a serious documentary, but it does pose some interesting questions about how cats live.

According to the material presented in the film, stray cats live for about three years on average compared to house cats, which can live up to 15 years. Female cats usually give birth to between five and seven kittens but if the mother is a stray, just one or two of her young will survive because of the harsh circumstances into which they are born.

“I’ve been traveling for the past 15 years and have been to more than a dozen countries but only stray cats in Korea run away when they encounter humans because they see us as a threat,” said Lee. “Our lives have improved a lot compared to the 50s and 60s but many people still have no compassion for these small animals.”

Lee and Yoon said they are now both involved in advocating for the animals. After the screening, they proposed some alternatives for dealing with the stray cat population in Korea, which has increased in recent years.

They said that trap-neuter-return, also known as TNR, is an ideal way for humans and stray cats to coexist but they also said that many of the existing TNR programs in cities around the country are problematic.

“There are certain rules. They can’t trap kittens or cats that are pregnant. Once the cats are neutered, they must be returned to the place where they were trapped because cats are territorial animals,” Lee said. “But none of these rules are followed by the people who are subcontracted to carry out the TNR project.”

Lee added that the TNR projects are sometimes exploited by some for profit or simply ignored.

“Sometimes trapped cats are poisoned or they are released to nowhere. We have to firmly stand against such illegal TNR projects.”

Lee currently has three essay collections about stray cats under his belt and his first book, “Hello and Thank You Stray Cats,” which served as the impetus for the film, was published in China and Taiwan. It will soon be published in Japan.

“Dancing Cat” is slated to open next Thursday at 20 or so theaters in Korea. It is also likely to be screened outside the country in the near future, according to an official at Indie Story, the film’s production company.