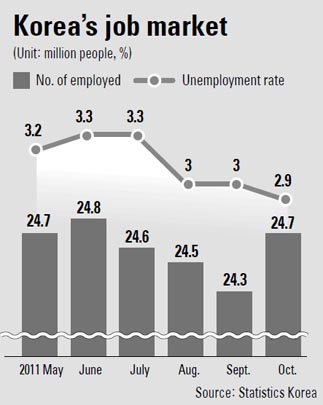 The jobless rate fell in October from the previous month as job creation accelerated at the fastest pace in 17 months, showing signs that long-frozen labor conditions might be thawing, a government report showed yesterday. There are still concerns, however, as improved conditions are hardly noticed in everyday lives.

According to Statistics Korea yesterday, the country’s jobless rate stood at 2.9 percent last month, which is lower than the 3 percent tallied in September. The rate was also down from 3.3 percent tallied in the same month a year earlier. The report showed that 501,000 more jobs were created last month compared to the previous year. The on-year job increase was the largest since the economy gained 586,000 jobs in May, 2010.

Statistics Korea explained that as hiring expanded, centering on the service sector, the number of jobless people declined significantly, dragging down the unemployment rate in the process. Last month’s job creation was led by the health and social welfare service sector, which added 141,000 more jobs last month from a year earlier. The wholesale and retail sector hired 128,000 more but manufacturing eliminated 55,000 jobs over the same period. The number of people who stayed out of work despite efforts to land a job declined to 736,000 last month from 832,000 a year earlier. It is also lower than the 758,000 tallied a month earlier. Yesterday’s job data comes as the government has been working to encourage companies to hire more workers, believing that more jobs will boost domestic demand and eventually lead to economic recovery.