Getting clean is as easy as taking it all off

Getting clean is as easy as taking it all off 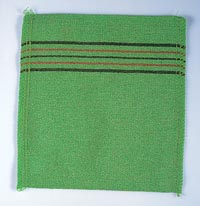 In the West, taking a shower is all that you do to clean your body. But many Koreans take one additional step: They go to a public bathhouse and scrub off the dirt and dead skin cells, or ddae in Korean. Some do it on their own while others hire a “ddaemiri,” a person who provides such a service. Of course, ddaemiri only serve those of the same gender, and they wear underwear - unlike the visitors, who are entirely naked while at the bathhouse.

Ddaemiri operate in a space reserved for them in a corner of the bathhouse. The space has a few massage tables covered with a waterproof lining and shower facilities.

To take advantage of the service, you first need to book a ddaemiri and give the person your locker number. People can generally pay in advance or after the scrub-down.

When the ddaemiri is ready, you are called up by your locker number. After lying down on the table, the ddaemiri will do everything from scrubbing off dead skin to cleansing your body.

To do the scrubbing, the ddaemiri uses a cloth widely referred to here as an “Italian towel.” Coming mostly in four colors - green, yellow, pink and blue - an Italian towel is made of biscos rayon cloth, a coarse material.

The nickname comes from the textiles company owner in Busan who invented it in 1967 after importing the material from Italy. Before the Italian towel became popular, Koreans used a regular towel to scrub their bodies.

The fee for the whole process costs between 18,000 won and 25,000 won ($16 to $22) at ordinary public bathhouses but the price is higher at upmarket hotels and spa facilities.

You can also have your hair washed or get a massage for an extra fee. Ddaemiri can also be found at bathhouses in the Koreatowns of Los Angeles and New York, where the prices are even higher.