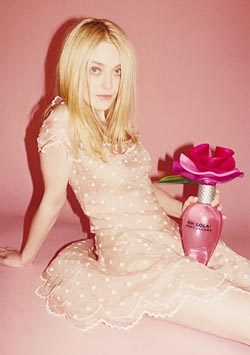 Four readers complained about the magazine ad for Jacobs’ recently launched “Oh, Lola!’’ perfume, the Advertising Standards Authority said. The ad showed the 17-year-old star in a pale short dress, sitting with an oversized perfume bottle - which is shaped like a vase holding a giant red flower - between her legs.

The watchdog said that Fanning looked under 16 years old in the ad, and the styling in the image drew attention to her sexuality.

“Because of that, along with her appearance, we considered the ad could be seen to sexualize a child,’’ it said.

Perfume maker Coty UK said it had not received any complaints. It said that the ad was targeted at readers over 25 years old, and that while the image was provocative, it wasn’t indecent. Most magazine readers would be used to “edgy images’’ in fashion magazines and are not likely to find the ad offensive, it added.

Fanning is best known as a child actress in movies including “I Am Sam’’ and Steven Spielberg’s TV series “Taken.’’