Pacquiao vs. Marquez: Round three

Pacquiao vs. Marquez: Round three 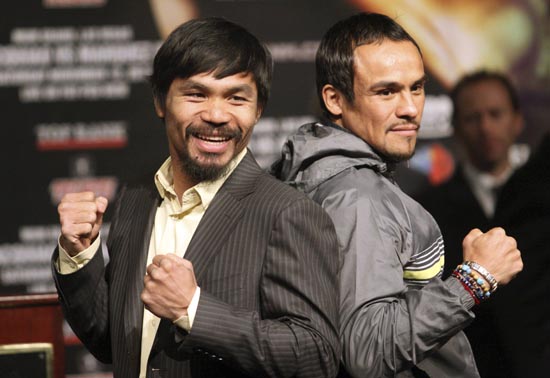 
LAS VEGAS - Mexican Juan Manuel Marquez is confident his style will be the significant factor but Manny Pacquiao believes his own improved technique will decide the outcome when the two boxers clash at the MGM Grand on Saturday.

With Pacquiao’s WBO welterweight title on the line, the two men will be fighting for a third time and both predict that the concluding bout in their trilogy will yield the most emphatic finish.

“They always say that styles make fights, and I think my style happens to be difficult,” Marquez told reporters while preparing for their scheduled 12-round bout. “All boxers have a difficult opponent, and I guess my style is the most difficult for Pacquiao.”

Marquez was knocked down three times in the opening round of their first fight in May 2004, but he recovered strongly to earn a draw.

In a rematch four years later, Marquez lost his WBC super-featherweight title to the Filipino in a controversial split decision after being knocked down in the third round.

However, Marquez has repeatedly claimed he won both contests and Pacquiao felt insulted after his opponent wore a T-shirt bearing the legend: “We Were Robbed” when their Nov. 12 showdown was promoted in the Philippines.

“This fight is really important to me because there’s that issue, the claims that he won the last two fights, and that’s why I’m very motivated with my training,” Pacquiao said.

The Filipino southpaw has also warned Marquez that, if he expects to meet the same opponent in the ring that he faced in their two previous fights, he will be in for a surprise.

“I’m more improved right now, compared to three years ago, four years ago,” said Pacquiao, who has a career record of 53-3-2 with 38 knockouts.

“I’m more experienced, especially in my strategy and techniques. I’m more improved in [throwing] my right hand, my movement side to side, and my timing.”

Marquez, 53-5-1 (39 KOs), acknowledged the improvements in Pacquiao’s technique but said he was unconcerned.

“Obviously he’s changed over the years,” added the Mexican, who has won world titles in three weight classes.

“He uses his right hand more, he has a little more speed, but obviously I know all of that, so I’ve adjusted my work to that. My strategy is to nullify all of that.”

Perhaps the biggest factor on Saturday is size.

The first two fights took place at featherweight and super-featherweight. Since their second encounter, however, Pacquiao has rampaged through the weight classes to become the first man to win world titles in eight weight divisions.