‘Digilog’ named as strategy for development at forum

‘Digilog’ named as strategy for development at forum 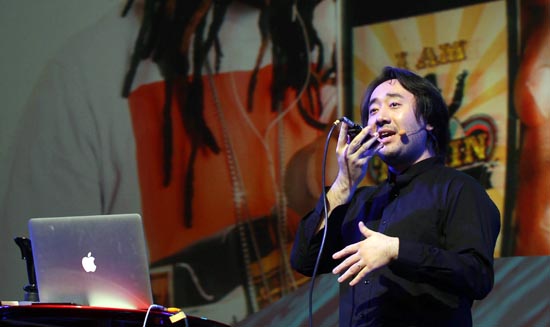 Ge Wang, developer of the Ocarina music application, makes a speech at the 2011 Tech+ Forum at Kyung Hee University in Seoul yesterday as the two-day forum wrapped up. By Byun Sun-goo


Global leaders from various fields - technology, business, economy, new media and culture - agreed on the importance of creativity in the fast-changing digital era at the 2011 Tech+ Forum yesterday.

And they proposed a so-called “digilog” strategy for audiences to better understand current transformations.

“This year’s Tech+ Forum can be summed up with one big idea: a combination of digital and analog technology. More specifically, it means developing technology that understands and impresses people,” Kim Yong-geun, president of the Korea Institute for Advancement of Technology, said yesterday at the last session of the forum titled Creation and Convergence: A New Paradigm Guide.

For the past two days, the speakers were specialists in different fields, but they raised one voice in stressing the need for creativity.

Held under the theme of “technology@me,” the 2011 Tech+ Forum ended its two-day run yesterday. About 20 industry leaders from around the world gathered in Seoul to attend the forum and introduce new strategies and trends in the changing ecosystems of industry and technology.

Richard Florida, a professor at the University of Toronto and author of “The Rise of the Creative Class” said, “The core asset for economic growth is people, and the creative class leads the growth.”

“The creative class brings openness and professionalism to cities and this attracts creative talents along with capital and businesses,” Florida said, adding that the class he referred to stretches from musicians to scientists and entrepreneurs.

Known as an expert in urban planning, Florida ranked as one of 140 most influential figures in the world by Time magazine this year. He has about 130,000 followers on Twitter.

Florida said the 21st century is an era of creativity, while the 20th century was controlled by conglomerates.

“The past era was dominated by IBM, GM, Ford, Samsung and Hyundai. But today, people who have things in common gather to share ideas, combine them and create new things,” he said.

He proposed three factors for creativity to become an engine for economic growth.

“In the era of creativity, there are three essential factors: technology, talents and tolerance. Technology itself is insufficient. Talents have mobility. They move for better opportunities. If we have technology and talents, then we need to open our hearts to accept new ideas and make efforts to develop them further,” the professor said.

“These three factors are essential to the economy, prosperity and quality of life. And creativity requires diversity,” he said.

The most popular session of the forum ran under the name Power of Social Network. The speakers agreed that social networking services produce a huge information community and create new values through communication and understanding.

Ge Wang, an assistant professor at Stanford University, helped develop the Ocarina music application, the most downloaded app in the world.

“Technology is being made continuously, but it is disappearing at the same time as an era is fast-approaching where we don’t need to recognize the existence of technology,” Wang said.

The developer showed off the app by performing the traditional folk song Arirang.

On the first day of the forum, analog experts unveiled their secrets to applying technology to analog platforms and adding high technology to long-held traditions.

W. Brian Arthur, the author of “The Nature of Technology” and an external faculty member at the Santa Fe Institute in the U.S., stated that a profound change is taking place.

Arthur, a complex system economist, is known for his prophesy about the evolution of technology. “New technology appears and changes the economy, industry, society and the government every 50 or 60 years,” he said.

“Today’s intelligent computers not only do the math, but also complete tasks for humans,” he said. “If the Industrial Revolution can be analogous to the muscles of a human, technology is like nerves and intelligence to the economy.”

Ishiwata Ken, the ambassador for global high-end audio manufacturer Marantz, talked about the convergence of digital technology and analog sound.

“Digital technology is good at producing original sound, but humans are able to discern analog sound, so for the best quality of audio equipment, there needs to be a good combination of digital and analog,” he said.

Prosper Assouline, founder of Paris-based Assouline Publishing said, “A luxury brand has its own DNA.” His company publishes books for Chanel, Goyard, Cartier and Prada, among other luxury brands.

“I have worked with luxury brands for the past 10 years, and now I know they try to find their own DNA and invest themselves in nurturing a tradition that will last long,” Assouline said.

“Such efforts have created rarity, a condition to be a luxury brand,” he said.