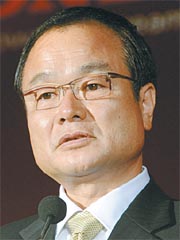 Honda Motor will actively utilize its global manufacturing bases around the world, including in the U.S., to overcome the negative effects of the inflated yen.

Takanobu Ito, the carmaker’s president and CEO, made the announcement in southern Seoul yesterday, hinting that Honda will soon send vehicles produced in the U.S. to the Korean market.

Ito came to Korea to mark the launch of Honda’s 9th generation Civic compact sedan in the country yesterday, marking the model’s debut in the Asia-Pacific region. The Civic was first introduced in 1972 and some 20 million units have since been sold in 160 countries.

Japanese manufacturers have been suffering recently due to the high yen, which makes their products more expensive overseas.

“The exchange rate has been so volatile that we have been suffering,” Ito said. “We will first consider using our manufacturing facility in the U.S., with a free trade agreement pending between Korea and the U.S.”

It has been a tough year for Japanese automakers, and especially Honda, which saw its parts supply chain damaged by the devastating earthquake in northeastern Japan in March. This was followed by more bad news as the yen shot up and flooding in Thailand shuttered plants there.

Honda is again suffering from a shortage of components because of the floods, but Ito said the damage was more manageable than that inflicted by the quake earlier this year.

Ito said Honda’s automobile factory in Thailand is flooded but that its motorbike factory was not affected.

“The water level is subsiding, albeit slowly,” he said. “Also the components shortage is less serious than during the earthquake, and parts affected are not as high-tech so they can be replaced.”

Ito said Honda will gradually switch over to the new batteries.

“The use of lithium-ion batteries will increase, but we won’t stop using nickel- metal hybrids,” he said “For future models, though, we’ll go with lithium-ion ones.”