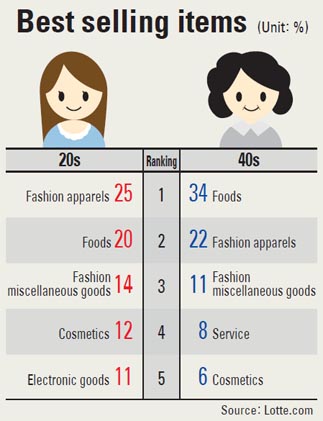 Ahn Jin-hee, a 45-year-old homemaker in Seoul, tried ordering milk online for a one-month trial period recently after she discovered she could cut her costs by 5 percent by ditching phone orders for those made on the Web.

“I started using online shopping malls a few years ago because they are cheap and convenient,” she said. “Except for fresh foods like vegetables, and clothing, nowadays I order almost everything online.”

Her case illustrates a broader trend that is seeing legions of consumers in their 40s making the switch to online shopping across the nation as numbers reach previously unscaled peaks. On the flip side, adults in their 20s are starting to beat a retreat from such sites, according to industry sources. 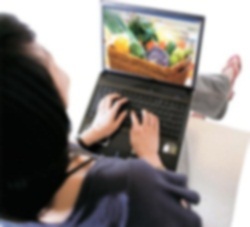 Sources at Lotte.com said the balance of online consumption between those in their 20s and 40s is now more skewed than ever as late adopters cotton on to the convenience of this medium, while younger people are purchasing less across the board. Students and new graduates especially are tightening their belts to stay afloat in a sea of expensive college tuition fees and rising consumer prices as they face the prospect of an increasingly unwelcoming job market.

Kim Hyun-ah, a 26-year old employee at an IT firm, is also a part-time student who studies at an online university.

Kim said she used to shop for cosmetics and accessories on the Internet four or five times a month, but has now curbed her beauty buys.

“I tightened the purse strings because of the burden of high tuition fees,” said Kim, who declined to give her full name. “I used to surf the Web to satisfy my shopping cravings whenever I got bored, but I had to stop it. It was a bad habit.”

Lotte.com said that people in their 20s still eat up the largest share of the online shopping market, but now the middle-aged demographic is quickly gobbling up more of the pie. The store currently boasts over 15 million users.

In 2005, shoppers in their 20s made up 42.8 percent of sales, but this figure dwindled to 32.4 percent in the first half of this year, the company revealed on Sunday.

Over the same period, the share of total sales held by people in their 40s rose to 26.2 percent from 14.7 percent. Comparable figures for the 50-60 age brackets jumped to 10 percent from 3.8 percent.

Yet 40-somethings are desirable clientele as they have more spending power and are less stingy than other age groups. They shell out 135,766 won ($122) per month on average, compared to the 117,844 won that adults aged 20-30 spend, Lotte said.

There are also sweeping differences in terms of what they add to their respective shopping carts, with younger people focusing on themselves and older people buying for their families.

From January to June this year, apparel accounted for one-quarter of sales by the younger age bracket, while food was the top choice of shoppers in their 40s, accounting for 34 percent of sales.

The changing sales patterns are having an impact on how online shopping malls sell their wares and what stocks they buy. The milk delivery service, for example, was introduced mostly to cater to older housewives.

In July, CJ Mall opened a section devoted to Hyundai Kintex, which allows consumers to order high-end goods sold at Hyundai Department Store but at a discounted price of 3 percent to 10 percent.

“Middle-aged consumers are still wary of shopping online because many of the goods sold there are so cheap,” said Moon of Lotte.com.

“They choose names and products they can trust, so many prefer to go for branded goods. The areas devoted to department-store goods by some online retailers specifically target them.”

In terms of mobile shopping conducted by smartphone, however, consumers in their 20s and 30s control two-thirds of the market.

Officials from 11st, run by SK Group, said that 45 percent of the site’s orders derive from consumers in their 30s, followed by those in their 20s (40 percent) and 40s (9 percent).

The site currently runs separate malls for online customers and those who order by phone, but there is a discrepancy in buying patterns between the two. For example, sports and leisure activity goods top the list of phone-based orders, but only rank 10th in online orders, employees said.

Meanwhile, industry sources project that the mobile shopping industry will continue to boom in tandem with the rise of smartphones. Korea had more than 20 million registered smartphones last month, a number close to half the population.

One of the benefits of this business segment is that it stays busy during weekday rush hours, when many consumers are driving or taking the subway to their work or home. But between the hours of 6 a.m. and 9 a.m., and 6 p.m. to 10 p.m., Internet traffic peters out considerably.

The same holds true at weekends, when many people head out to enjoy their days off - but take their iPhones and Galaxies with them.