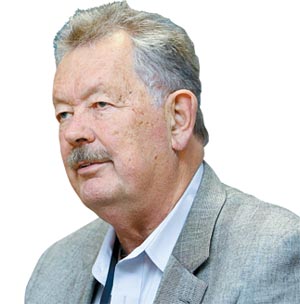 Hammering home his point, Elliot, who also worked for IBM and Intel, said no rival can match the U.S. consumer electronics titan in terms of innovation and economic value created.

“Numbers are only numbers. You should look at the economic value Apple created, not at how many smartphones it sold,” Elliot said regarding a recent market survey showing that Samsung outstripped its chief rival in global smartphone shipments in the most recent quarter.

Elliot, known as a mentor to Apple co-founder Steve Jobs, was visiting the city for the first time to attend the 2011 Tech+ Forum, held at Kyung Hee University.

He said that while other smartphone manufacturers focus on hardware, Apple created its own advanced software and unique culture.

“Apple has created a market value that is three or four times greater than Samsung,” he said. “Apple’s latest iPhone 4S is selling well, and it will exceed Samsung’s sales.”

Elliot said the company has kept its competitive edge by placing a strong emphasis on the need to develop quality software, whereas Korean companies focus too much on hardware.

“Samsung makes TVs, but they have no content. That’s why Samsung doesn’t have control over the TV market or other products made by other companies,” he said. “Apple makes not only hardware, but also content. That’s the big difference.”

He stated his belief that Samsung will face “more disadvantages as it more relies on Google’s Android OS,” adding that “brand recognition derives from content, and that creates brand value.”

Amid a climate of ongoing patent-violation disputes between Samsung and Apple around the world, he said this was unlikely to sour their relationship in terms of parts. Samsung is Apple’s largest supplier of memory chips and batteries for its smartphones and tablet PCs.

“Apple wants to use best-quality products. Samsung and LG manufacture good parts and components, so I don’t think Apple will diversify its part suppliers,” he said.

Elliot, who worked directly under Jobs during his 20-year stint with the company, stressed the importance of his leadership skills. Jobs passed away on Oct. 5 after a long battle with pancreatic cancer.

“I don’t see anybody on the horizon, anybody out there in the world, who can be called an innovator like Jobs,” he said. “The main driver behind his innovation was passion for products ... he was always preoccupied with what consumers would like and need. He thought of his products first and hired people that would fit the products.”

Elliot, who saw sales grow from $150 million to over $3 billion during his time at Apple, is expected to elaborate on Jobs’ leadership style and Apple’s corporate culture at his speech scheduled for today, when the two-day Tech+ Forum wraps up.

The forum is running under a main theme of “technology@me” and is being co-hosted by the Ministry of Knowledge Economy in conjunction with the Korea Institute for Advancement of Technology and the JoongAng Ilbo at Kyung Hee University. Minister of Knowledge Economy Choi Joong-kyung introduced a new strategy for technology research and development at the forum yesterday. “We will pursue innovation in a way that cares about people, going beyond convenience and coldness,” he said.