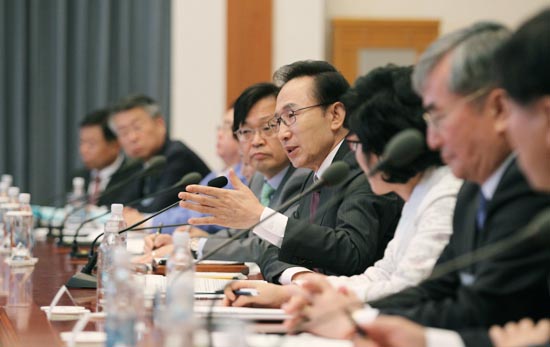 
The government announced yesterday a range of measures including a 10 percent mandatory power cut by major manufacturers and limited use of neon signs during peak hours in a bid to prevent another nationwide power outage.

“We are facing great difficulties this winter,” Kim Jung-gwan, a vice minister of knowledge economy, told a press briefing.

“The electricity supply would be stable if the reserve level was above 4 million kilowatts, but it is expected to drop to as low as 530,000 kilowatts during the peak season between the second and third weeks of January.”

The move follows massive blackouts on Sept. 15 that affected over six million homes throughout the country and led to nearly 9,000 claims, seeking over 60 billion won ($53 million) in damages.

The government earlier said it had to cut off the power supply as the country’s electricity reserve levels had shrunk to as low as 800,000 kilowatts. This was less than 1 percent of total capacity and far below the 4 million kilowatts that are considered safe.

To maintain the reserve level at 4 million kilowatts, the government will require the country’s 14,000 large businesses and manufacturers that use over 1,000 kilowatts at any one time to scale this usage back by 10 percent during peak hours, which will be set by the government.

However, Shin Yong-min, a deputy director at the ministry, said that realistically speaking it will “not be easy” for them to reduce their usage by 10 percent.

In addition, some 19,000 central and regional government offices will be required to keep the heating under 18 degrees Celsius.

Meanwhile, the use of neon signs will be banned from 5 p.m. to 7 p.m. daily from Dec. 5 to Feb. 29. Each business will also be limited to the use of only one neon sign, even excluding peak hours.

A neon sign uses up to eight times more electricity than signboards that use other forms of lighting, Kim said.