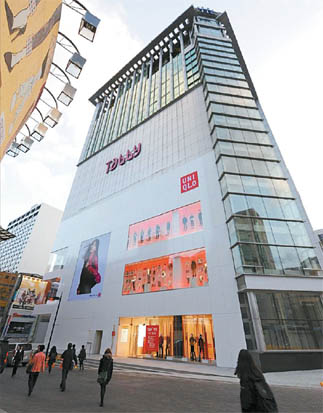 Uniqlo’s first Global Flagship Store in Korea will open in Myeong-dong, central Seoul, today. It is the Japanese retailer’s largest such store in Asia. Provided by the company

Japanese fast fashion giant Uniqlo will open its largest Global Flagship Store in Asia, and its eighth worldwide, today in Myeong-dong, central Seoul. As a part of the company’s brand globalization strategy, Uniqlo has been aggressively expanding similar stores in fashion hubs around the world since it opened its flagship store in New York’s Soho in 2006. The destinations that have been added to the list since then are New York, London, Paris, Shanghai, Osaka and Taipei.

Uniqlo, founded in 1984 as a small apparel manufacturer in Hiroshima, Japan, is now the world’s fourth-largest fashion brand after Inditex (Zara), H&M and Gap. It operates 1,024 stores in 11 countries. Uniqlo is a portmanteau word of unique and clothing, according to the company.

“The Asian market will be a key growth engine for Uniqlo in the next 10 years and I see a great business opportunity out there in Korean market,” Yanai Tadashi, CEO and founder of Fast Retailing told reporters yesterday.

“Opening a Global Flagship Store in Myeong-dong is very significant for us. I want to transform Uniqlo into a brand that represents Korea.”

After entering the country five years ago, Uniqlo has made solid progress. In the 12 months leading up to August 2011, the company raised a total of 360 billion won ($317.6 million) in sales, 12 times higher than the 30 billion won it raised in 2006.

Mr. Yanai spoke with the Korea JoongAng Daily to share his future business plans prior to a press conference at the Seoul Plaza hotel.

Q. Uniqlo has been aggressively expanding into the global market in recent years, but this could eat into profitability due to heavy rent fees and labor costs. What’s the significance of launching a Global Flagship Store in Korea? 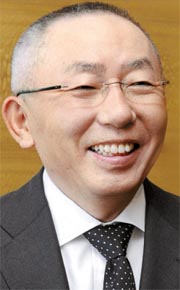 A. While Uniqlo is a popular brand in Japan, it isn’t well enough known to other consumers around the world. We’re opening Global Flagship Stores at globally hot locations because we want more consumers there to find us and our brand. Despite the high rent fees and labor costs, I’m confident this will eventually generate profits.

It’s Asia. I’m watching the Indian and Chinese markets. The two countries boast a combined population of 3 billion and they will have a middle-class population of 1 to 1.5 billion in the next 10 years with their increased economic development. This is a huge opportunity for both Korea and Japan, as they are geographically adjacent to these countries. Uniqlo aims to raise 3 trillion yen ($38.6 billion) in sales in Asia by 2020.

How does the company maintain such low prices?

Uniqlo’s factories are assigned to produce specific items. And each factory produces the same item with slight updates reflecting the latest trends for each season. But factories controlled by other competitors produce different items depending on the season, which impedes their efficiency. That’s a key difference that allows us to provide high-end quality clothing at reasonable prices.

Any advice for Korean apparel companies?

“The key to success in the global apparel industry is the power of global networking, which incorporates resources scattered around the world. This decides whether a company will be victorious or not. Uniqlo is where it is now because it succeeded in terms of global networking. Forever 21 is an American brand, but it was founded by Koreans. More Korean apparel companies should not be limited to the local market. They must go global. They should set a business model that manufactures items overseas and sell them abroad.

Koreans tend to sneer at low-priced goods but will happily buy and wear Uniqlo clothing. Why is this?

The age of clothing reflecting a person’s status is fading away. Clothing is now an essential tool that provides comfort. Uniqlo’s business goal is not about being cheap. Our goal is to allow everyone to wear high-quality clothing at reasonable prices, but we never sacrifice quality, management or service. Uniqlo’s Global Flagship Stores reflect this refusal to surrender any of the three factors to lower costs.

As a business model that seems to have failed, can you comment on the situation at Sony?

Sony lost its reputation because it failed to preserve its founder’s DNA amid a generational transition ... If a company can transfer its founder’s DNA to its executives and employees, the company will stay strong.

SPA (specialty retailer of private label apparel) clothing has become a hot trend worldwide, and Zara, H&M, Forever 21 and Uniqlo are among the popular fast fashion brands. But some critics see fast fashion as just a fad. Is the end nigh?

This business model will never die, because the format was only recently born and is now going global. We have just started expanding globally, and I believe the SPA industry will grow bigger and stronger in the future. I’m sure other SPA brands such as Zara and Forever 21 perceive it in this way, too.

This is your first interview with the Korean media since Japan was struck by a large earthquake in March. We know you donated 1 billion yen as a relief fund. How has Japan changed since the quake?

After the quake, more young adults in Japan are willing to get involved in volunteering work than ever before. Many young people lacked this quality before. This has generated a social environment where people are more willing to lend a helping hand than was the case before.