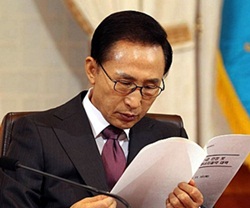 The Blue House expressed extreme frustration yesterday over the stalled ratification of the Korea-U.S. free trade agreement in the National Assembly as opposition lawmakers refused to budge from their demands for the removal of the investor-state dispute settlements (ISD) clause.

A plenary session of the National Assembly that was scheduled for yesterday was canceled out of fear that it would spark a violent brawl as the ruling Grand National Party and the main opposition Democratic Party continued to struggle over the ISD provision.

Democrats have insisted that the provision be removed to protect domestic companies, and attempts by the two sides to reach a compromise have been scuttled by opposition lawmakers in the past few weeks.

It was the second time this month that the ruling and opposition parties had to cancel a plenary session. The next plenary session is scheduled for Nov. 24.

A senior Blue House official yesterday lambasted the groundless rumors spreading about the FTA, saying that it was delaying the ratification and expressing frustration that there was little the presidential office could do now that the ball is in the legislature’s court.

The official added that Korea and the United States already had an agreement to form a committee after the FTA takes effect where it could discuss any issues, including the ISD provision.

“On Oct. 30, Trade Minister Kim Jong-hoon and U.S. Trade Representative Ron Kirk exchanged letters that the two countries would discuss any issues raised by any party within 90 days after the FTA takes effect,” the senior Blue House official said. “They are official letters exchanged by the two chief trade policy makers.”

The committee would have its first meeting within 90 days of the FTA’s implementation, the official said.

“The two trade ministers are to discuss all issues,” the official said, “and it just puts us in a difficult position to give [the opposition] another assurance on the specific issue.”

According to the official, Representative Hwang Woo-yea, the GNP floor leader, and his DP counterpart, Representative Kim Jin-pyo, had at one point reached a compromise on Oct. 31 based on the letters exchanged by the trade ministers.

The two floor leaders had agreed to approve the FTA as is, on the condition that Seoul and Washington would start discussing whether to keep the ISD provision within three months of the FTA taking effect. Within a year of the discussions, the government was to report to the National Assembly on the ISD provision, with the legislature deciding whether to keep the provision or not, the compromise said.

The compromise, however, was rejected by DP lawmakers the next day. Democrats instead drafted a counterproposal, demanding that President Lee Myung-bak meet with U.S. President Barack Obama to obtain a promise that the two countries will have a negotiation to remove the ISD provision.

The counterproposal was rejected by the ruling GNP and the administration, creating a deadlock in the National Assembly for days.

Asked if President Lee had any plans to meet with Obama on the sidelines of the APEC meeting in Hawaii this weekend to discuss the issue, the Blue House aide flatly rejected the possibility, calling it a diplomatic nightmare.

“That is a rough diplomatic action to take,” he said. “The U.S. Congress has already approved it, and it is unimaginable to raise the issue at the presidential level. There aren’t enough words to describe the terrifying effect it would have on the Korean government in the future. Don’t even think about it.”

He also expressed frustration that the Blue House could not take further action to persuade lawmakers because it could be seen as giving pressure to the National Assembly.

President Lee’s attempt to give a speech at the National Assembly was turned down by the Democrats. And when Kim Hyo-jae, senior secretary to the president for political affairs, sent letters to all 168 GNP lawmakers to urge the FTA’s ratification, opposition parties fiercely condemned the move as “an order to charge” - railroading the FTA through by using the ruling party’s large majority.

Asked if the Blue House intended to request National Assembly Speaker Park Hee-tae to open a plenary session in the near future and introduce the FTA ratification bill by using his authority, the official said, “We shouldn’t.”

Speaker Park himself also appeared to have no intention of introducing the FTA directly to the floor.

“Finding a way of compromise is the substance of politics,” Park said, urging the ruling and opposition parties to come to an agreement on the FTA.