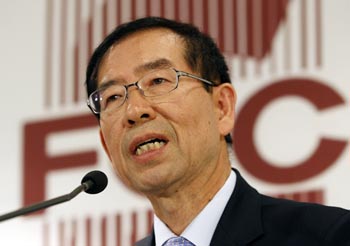 Seoul Mayor Park Won-soon, who was swept into office last month on promises of improved cooperation and communication, is butting heads with local government officials over transportation and the city’s homeless.

On Tuesday, Korail officials were baffled by an official request from the mayor to review a policy that prohibits the homeless from staying in Seoul Station, a measure that was instituted in August by former Mayor Oh Se-hoon to clean up the area after a flood of complaints and to step up the city’s efforts to support the homeless.

“We don’t know what to do with the city government’s sudden change on the issue,” a Korail official said. “It’s not a real solution to open up Seoul Station to the homeless if we want to support them.”

Park’s request came after he visited the National Medical Center on Sunday to pay his respects to a homeless man who died in a subway station bathroom. There, Park spoke to staff from homeless support centers, who asked the mayor to reconsider the eviction policy at Seoul Station.

The request also has officials from the Seoul Metropolitan Government scratching their heads. “There are very few homeless people left near Seoul Station, and Korail didn’t evict them ruthlessly,” said an official who oversees homelessness at Seoul Station.

The mayor is also clashing with Gyeonggi and Incheon governments after Park last week scuttled a planned increase in bus fares from 900 won ($0.80) to 1,100 won, an agreement that had been hammered out by all three local governments in September.

The three local governments have long discussed transportation fees together as many commuters travel across city lines on a daily basis.

Park announced that he was postponing the fare hike until next year because it would burden residents, but the unilateral decision has left the debt-ridden Incheon and Gyeonggi governments scrambling to figure out how to raise revenue.

The recent moves by Park appear to be part of a concerted effort by the activist-turned-mayor to present himself as being open and responsive to the public’s concerns.

He has been traveling across the city to meet with members of the public, including a recent visit to Wolgye-dong, northern Seoul, after residents detected high radiation from some area roads.

Political analysts, meanwhile, said that Park’s governing style - frequent on-site visits and meetings with members of the public - may not be sustainable, since it is virtually impossible for a mayor to listen to every resident’s concerns in person. They also warned that relying on in-person chats with members of the public to make policy could limit the mayor to a narrow slice of views.

“Park’s working style shown during these days is similar with that of former Mayor Lee Myung-bak, who visited the city’s police precincts right after he was elected,” said Yu Jae-won, a professor of public administration at Hanyang University. “This kind of style can satisfy citizens’ demands quickly, but it could prompt dispute with departments and organizations.”

Lee Chang-won, a professor of public administration at Hansung University, suggested that Park needed to focus on administrating and move away from governing as an activist.

“If a civic activist is an attacker of government, the mayor of Seoul is supposed to be a defender of administrating,” Lee said. “A defender is condemned for just one mistake, while an attacker is complimented for one success.”