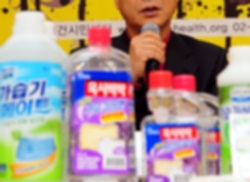 A civic group, the Asian Citizen’s Center for Environment and Health, held a press conference yesterday in the Rachel Carson Hall of the Korea Green Foundation in Seoul, demanding the government immediately order the recall of all sterilizers used in home humidifiers. The sterilizers have been accused of mysteriously making people sick. The group criticized the Ministry of Health and Welfare for treating this issue as a “mere formality.”

The center has been conducting its own investigation into cases of patients who fell ill after using the sterilizers in their humidifiers throughout the country. The center said that a total of 91 cases were reported so far.

Of the 91 patients, 28 people, including 17 infants less than a year old, four babies between ages one and two, and six adults, including four pregnant women, have died after developing pulmonary fibrosis, or scarring of the lungs, according to the center.

Moreover, the center asserted that 42 percent of the 91 cases were of patients who had one or more of their family members suffering from the same illness. According to the center, a pregnant woman surnamed Baek, 30, from Seoul, said she had used sterilizers in her humidifier at home since 2006.

Baek, who has a four-year-old daughter, gave birth to a second girl in March 2010. In April 2011, Baek developed pulmonary fibrosis and received a lung transplant in the same month. Then, her second daughter died after getting sick in June. Baek’s older daughter is currently hospitalized after receiving a lung transplant in September, when she developed the same illness.

The center revealed information on all 91 cases, including patients’ surnames and which brand sterilizers they had used as well as how long certain victims were hospitalized before dying.

The center also revealed a letter of protest during the press conference yesterday, which was signed by 47 representatives from various circles, including Democratic Party lawmakers Lee Mi-kyung and Jeon Hyun-hee as well as Choi Yul, president of the Korea Green Foundation.

On Friday, the Ministry of Health and Welfare strongly advised people to stop using any brand of sterilizers for humidifiers. The ministry is scheduled to announce the final test results on mice tomorrow and said it will announce whether to demand a recall of the sterilizers.