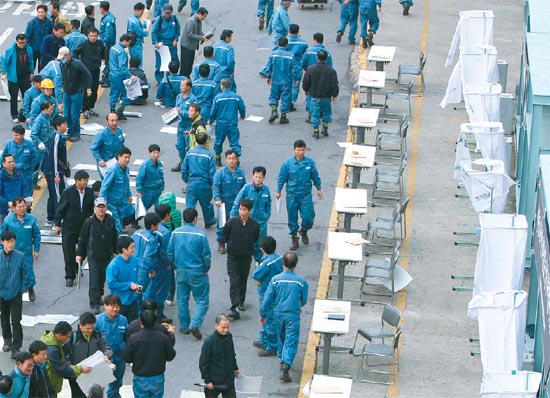 Union members of Hanjin Heavy Industries mill around ballot stations inside the shipyard yesterday in Yeongdo, Busan, after union leaders canceled a vote on the tentative agreement when police stormed into the shipyard to arrest labor activist Kim Jin-sook, who has been staging a sit-in protest on top of a crane. By Song Bong-geun

The agreement is contingent upon winning approval from union members through a vote.

In exchange for ending Kim Jin-sook’s sit-in protest on top of a crane in Hanjin’s shipyard in Yeongdo, Busan, the management promised in the agreement to re-employ all 94 assembly-line workers within a year and pay each of them 20 million won in compensation. Both sides also agreed to withdraw all lawsuits and accusations against each other.

Kim told Hanjin’s management yesterday that she would end her 309-day-long protest if the agreement is approved by union members. If the agreement is passed within the month, the laid-off workers would return to work in November 2012. 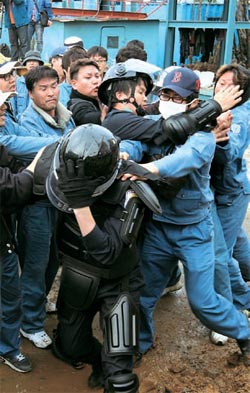 “I have mixed feelings,” Kim told local media yesterday. “I am glad that my humble protest opened the way to rescue the fired workers, and I hope any kind of ruthless layoffs come to an end from now on.”

However, a vote by the union that was scheduled for yesterday was canceled after 40 fired workers demanded that police officers, who had been sent to the crane, leave the premises.

“We were supposed to finish the vote and help Kim come down from the crane, but suddenly some workers protested the appearance of police officers under the crane, demanding that the voting be stopped,” a union member said.

Police already have an arrest warrant for Kim, issued by a local court in Busan, on charges of breaking into a private structure and interfering with public affairs.

“After checking her health at an authorized hospital, we will question Kim,” a Yeongdo Police official told local media.

The labor dispute at the nation’s seventh-largest shipyard started on Dec. 5, 2010, when Hanjin laid off 400 assembly-line workers. In response, about 1,100 Hanjin union members went on strike.

In January 2011, 230 of the 400 accepted the company’s severance package and left, but 170 workers refused to accept their termination.

On June 27, the union came to an agreement with management to provide a more generous severance package to the remaining 170 laid-off workers, which 76 people accepted but 94 people refused. Still unsatisfied with the agreement, four laid-off workers and Kim staged rallies inside Hanjin’s shipyard.

Despite an expulsion order from a Busan court, Kim has been protesting from atop a crane for about 10 months, prompting large-scale demonstrations, dubbed “Bus for Hope” rallies, which attracted thousands from across the country in June and July.

The demonstrations became a rallying cry for labor activists, who demanded better working conditions and the rehiring of the fired Hanjin workers.

On Oct. 7, under huge public pressure including from the National Assembly, Hanjin’s chairman caved and said he would rehire all 94 laid-off workers within a year.

It took another month to make the agreement final yesterday, as union members demanded that the company rehire the 94 as experienced workers and not as entry level. Giving in once again to the union’s demands, both sides signed on the final deal.