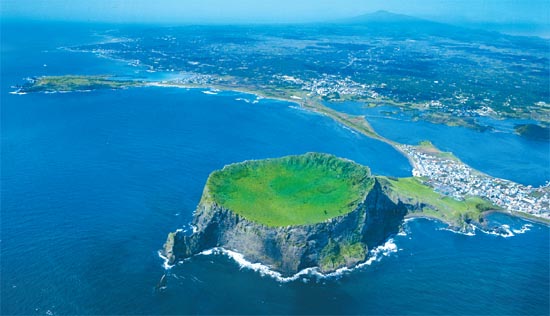 Formed by a volcanic eruption in the sea over 100,000 years ago, Seongsan Ilchulbong Peak is located on the eastern end of Jeju Island, which is currently in the top 10 in polls for the New7Wonders of Nature. [JoongAng Ilbo]


Upon discovering that Jeju Island had risen in the ranks as one of the top 10 locations vying for a spot as one of the New7Wonders of Nature, after checking the Web site on Sunday, Yang Gi-jeong of the World Natural Heritage Preservation Office in Yeon-dong, Jeju, let out a whoop of joy to alert his co-workers. With voting scheduled to end Friday, all eyes are fixed on Jeju.

On Monday, Chung Un-chan, chairman of the National Committee for Jeju New7Wonders of Nature, wrote a letter of appeal to Korean citizens that said: “If citizens call in all at once and we get 50 million votes, [Jeju’s] selection will be guaranteed.”

Voting ends on Friday at 8:11 p.m. and the results will be announced the following day by the New7Wonders Foundation.

The competition was organized by the New7Wonders Foundation, a Swiss NGO that initiated the global poll in July 2007, and Jeju Island emerged in the 261st spot out of 440 locations in December 2008. In July 2009, Jeju Island became one of 28 finalists and as of Sunday, Jeju Island is in the top 10.

The other locations vying for the New7Wonders designation include the Grand Canyon in the United States, Halong Bay in Vietnam, the Jeita Grotto in Lebanon and the Great Barrier Reef in Australia.

Most of these locations are already popular tourist destinations that are globally recognized and are also located in countries with large populations. For lesser-known areas such as Jeju Island, winning the designation is expected to boost tourism, and hotels and travel agencies are already gearing up to launch promotional campaigns should the southern island win.

Jeju Island has been granted triple crowns in the natural and scientific fields by Unesco: It won designation as a Biosphere Reserve in 2002, induction to the World Natural Heritage List in 2007 and designation as a Global Geopark in 2010. It is especially known for its dormant volcanic mountain, Mount Halla, which is the tallest mountain in Korea.