Jobs available for only a third of law school grads

Jobs available for only a third of law school grads 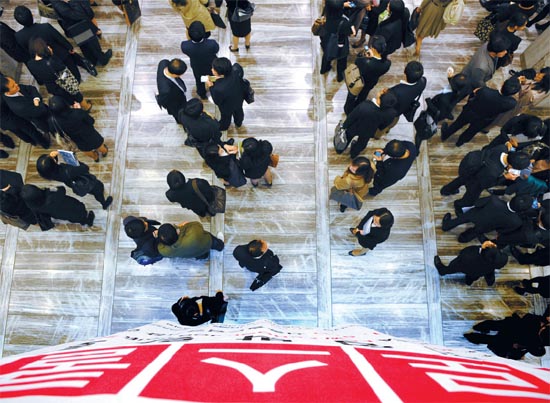 
February 2012 will see the first graduating class of the country’s new three-year graduate law school system, but now there are estimates that only 500 of some 1,500 law school graduates will be able to find employment because of an oversaturation in the market.

“Large law firms hold recruitment process seminars for law schools in Seoul, but in the countryside, we have no source of information,” said Lee Seul, 28, a third-year law student from Chonnam National University in Gwangju. “Because of my frustrations, I came up to Seoul.”

Out of Chonnam’s 102 graduating law students, only one has secured a job at a law firm so far.

The fair was announced on Sunday by Representative Lee Jeong-hyeon, member of the National Assembly’s Legislation and Judiciary Committee, who said that the Korea Corporate Legal Affairs Association and the In-House Counsel Forum would sponsor the event for law school students who are seeking job opportunities.

Lee, who came to Seoul by bus the previous day, is a graduate of Ewha Womans University’s social welfare department and has been an active volunteer for the disabled since high school. She chose law school to promote legislation for the underprivileged and selected Chonnam because it specialized in public and human rights law. She also serves as an editor of her school’s law review.

“I thought if I went to law school, I would be able to study what I wanted to instead of being hung up on simply passing the bar exam,” Lee said.

But like Lee, law students outside Seoul face discrimination in finding employment. Law students in Seoul have internship opportunities available in their first and second years, an experience which can segue into a job offer.

The Ministry of Education, Science and Technology accredited 25 graduate-level law schools in February 2008, overturning the previous system in which undergraduate students with a bachelor’s degree in law could immediately take the bar exam.

At the job fair, a policy forum also discussed ways to improve the country’s law school system. With tuition for law school at 20 million won ($18,000) per year and limited job opportunities, worry is rampant for law students who are not graduates of the big three schools - Seoul National University, Korea University and Yonsei University.

Kim & Chang, Kotra, SKT, Hyundai Motor Company and the Korea Legislation Research Institute were among the law firms, corporations and government offices represented at the fair.

Meanwhile, according to a poll taken during the job fair, 83.7 percent of 327 surveyed law students stated that they were “anxious about their path after graduation” while 73.6 percent of 53 representatives from enterprises and judicial affairs stated they were “not expecting much” out of graduates from the country’s law schools.