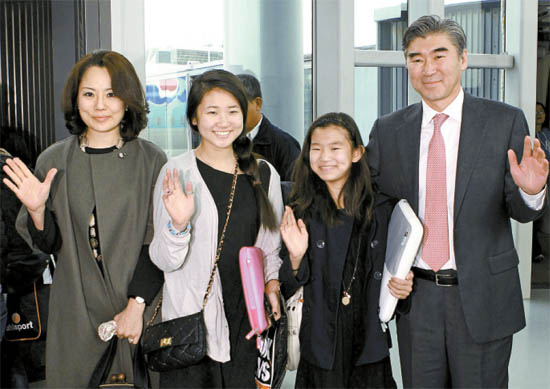 Sung Kim, the new U.S. ambassador to Korea, with his wife and daughters at his side, waves to reporters after landing at Incheon International Airport yesterday. By Kang Jung-hyun


Sung Kim, the new U.S. ambassador, said yesterday that the Korea-U.S. relationship was one of the most precious and important partnerships for the United States and that he would do his best to advance the alliance.

He made the remark upon arriving in Korea amid equal measures of optimism and caution about how he will do as the first Korean-born person to be the top U.S. representative in Korea and how his presence will affect Korea-U.S. relations.

The relationship between the two countries has grown stronger in recent years amidst the geopolitical uncertainties on the Korean Peninsula.

Kim, 50, landed at Incheon International Airport slightly after 3:30 p.m. with his wife and two daughters at his side. In a brief meeting with reporters at the airport, Kim expressed his gratitude for the reception in both English and Korean and said he felt honored to come to Korea to represent the United States.

He said that relations between Korea and the United States were based on the countries’ shared history and values, while expressing his hope that the partnership would expand beyond issues of the Korean Peninsula.

“I very much look forward to sharing my experiences with my Korean friends as we work together to advance our relationship,” he said, adding that this includes trade, the economy and security.

Kim, who was nominated to replace Kathleen Stephens as the U.S. ambassador to Seoul in June, received a delayed U.S. Senate confirmation on Oct. 13, a day after the U.S. Congress ratified the Korea-U.S. FTA.

Kim is the first Korean-born U.S. ambassador to Seoul since the start of bilateral diplomatic relations 129 years ago. Kim immigrated to Los Angeles with his family in the 1970s and acquired U.S. citizenship in 1980.

According to a U.S. Embassy official, Kim’s job will officially start after the Blue House gives its approval of his appointment.

Kim, an expert in Korean affairs, headed the Office of Korean Affairs at the U.S. State Department for two years beginning 2006 and then served as special envoy to the six-party talks on North Korea’s nuclear program since July 2008.