WWII in color: NY vet’s rare footage made into DVD

WWII in color: NY vet’s rare footage made into DVD 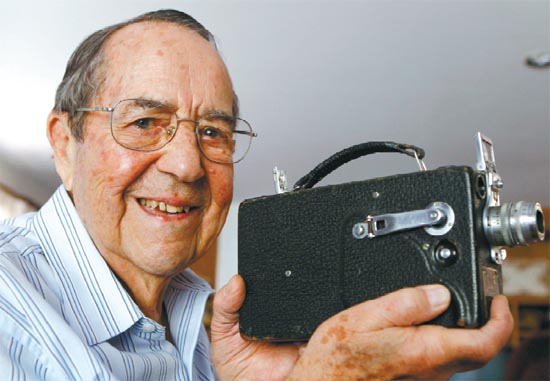 
POUGHKEEPSIE, New York - Edwin Fitchett, home movie camera in hand, had no plans to get close-ups of his boss that rainy, steamy day in the Philippines 65 years ago. He just wanted to capture the commotion of the Independence Day celebration in Manila. But the boss was Gen. Douglas MacArthur, supreme commander of Allied forces in the Pacific, and when Fitchett, a junior officer who was off duty, found himself within arm’s length of one of the world’s most recognizable figures, he took advantage.

With his khaki uniform helping him blend in with the military photographers in the crowd, the 24-year-old second lieutenant eased his way into the throng of press cameramen covering the festivities on July 4, 1946, the day independence was declared. He trained his Kodak Model K on the American general who two years earlier had carried out his famous vow to return to the Philippines.

“I felt a little queasy about it,” Fitchett recalled recently in the den of his home in Poughkeepsie, in New York’s Hudson Valley. “He could have banished me off to the moon if he wanted to.”

Instead, he captured rare color footage of a hatless MacArthur, sans his signature corncob pipe and aviator sunglasses, chatting with newly elected Filipino president Manuel Roxas and other officials as Filipinos celebrated their first day of independence from the United States. The scenes are among the highlights of “Ed Fitchett’s Army Memories, 1945-1946,” a 71-minute DVD Fitchett produced from the home movies he filmed while serving in the Pacific at the end of World War II. Much of his DVD resembles a 1940s movie travelogue rather than a wartime newsreel: young, shirtless American soldiers toss a football on a sunny beach; friendly locals wave from a dugout canoe gliding in front of a jungle waterfall; merchants peddle their goods on crowded streets.

But the aftermath of the just-concluded war also fills many scenes, from battle-damaged government buildings in a devastated Manila to sunken Japanese ships dotting a harbor in Formosa (now Taiwan). Stored for the past 65 years in the basement of Fitchett’s house, the footage offers a GI’s view of street and country life in the Philippines and Japan not usually seen in official military films from World War II.

“Not many people were interested” in seeing his Pacific movies once he returned from the war, said the 89-year-old retired dairy company executive.

“There was so much war news that most people had enough of it by this point,” Fitchett said. “My stuff didn’t impress them much.”

Black-and-white newsreels of the Filipino Independence Day ceremonies exist, said Nick Cullather, associate professor of history at Indiana University, but Fitchett’s film is the only color footage of the event he has seen. The film includes a brief glimpse of the U.S. flag being lowered during the ceremony while the Filipino flag is being raised, an image that appears on the Philippines’ 100-peso bill.

“It was very well-shot, very professionally done,” said Cullather, author of a 1994 book on U.S-Philippines relations during the war years.

Fitchett got his first movie camera at 15 and recorded family trips and holiday gatherings. He continued his hobby when he entered Cornell University in 1940, filming college and fraternity life on the Ivy League campus in Ithaca, New York. He enlisted in the Army in September 1942 but remained stateside until July 1945, when his artillery battalion was shipped to the Pacific. His unit was training for the pending invasion of Japan when the war ended just weeks after they arrived in the Philippines.

With U.S. military censorship restrictions lifted, Fitchett had his camera sent from home, along with rolls of Kodak color film.

Soon he was taking the camera along on sightseeing trips to Manila and the Philippines countryside, often in the battalion’s flimsy two-seater planes used as aerial spotters.

From the air, he filmed battle damage in Manila Bay, the city of Manila and on the battered island of Corregidor. On the nearby Bataan peninsula, scene of the infamous Death March in 1942, Fitchett’s buddies used the beaches as a landing strip and spent a day swimming, tossing a football and visiting a fishing village. His film also includes footage from a Japanese prisoner-of-war camp Fitchett commanded after the surrender. The prisoners included hundreds of Formosans and Koreans conscripted into the Japanese military as soldiers and laborers. The footage shows the POWs in their camp and later aboard the U.S.S. John L. Sullivan, which transported them back home.

Fitchett plans a public screening of the film at the institute on Dec. 14.