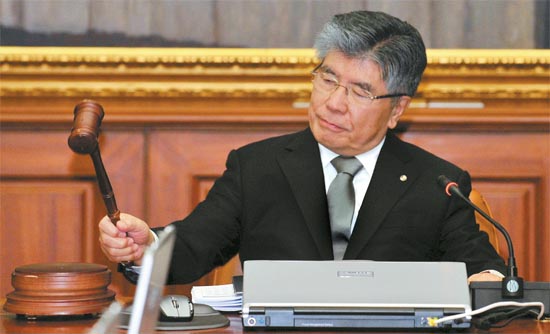 
When the Bank of Korea governor Kim Choong-soo entered the press room yesterday after the monetary policy committee meeting, he looked incisive. The determined look on his face, however, seemed to cover up his anxiety over the country’s fiscal policy as growing uncertainties in the global market prevented the central bank from raising the benchmark borrowing rate for the fifth consecutive month yesterday.

The BOK’s monetary policy committee agreed unanimously to freeze the benchmark key interest rate at 3.25 percent for November, citing global uncertainties stemming from the deepening euro zone debt crisis and eased inflation. There had been analyst expectations that the central bank would keep its interest rate this month as the global economic conditions remain gloomy. The last time the committee raised the rate was in June by 0.25 percentage points, following a hike in January, March and June, this year.

“The committee considers that while emerging market economies have shown favorable performances, major advanced economies have exhibited signs of sluggishness,” Kim said. “Going forward the committee judges that the global economy will show a recovery, albeit a moderate one, but that downside risks to growth are high, due mostly to the sovereign debt crisis in Europe and to the possibilities of the slumps in major economies and the unrest in international financial markets continuing.”

“As long as current economic situations do not change in an unexpected way, Korea’s monetary policy stance is still viewed as accommodative,” the BOK chief said. The country’s key rate, which was as low as 2 percent in February 2009, has been gradually rising. The central bank raised the borrowing rate 0.25 percentage points in January, March, and June previously this year to tame inflation.

The debt crisis in the euro zone has caused turmoil in global financial markets, including Korea. Local stock prices and the exchange rate continuously fluctuated due to external risks. The country’s export-oriented economy has also been affected by the slowdown in Europe and the United States. According to the BOK, the country’s gross domestic product jumped 0.7 percent in the third quarter compared to the previous year, slowing from 0.9 percent growth in the second quarter. Concerns over growth even led the European Central Bank and several central banks in emerging countries like Indonesia to cut their interest rates to prevent economic uncertainty from hurting their growth momentum. But the BOK said cutting the rate for Korea wasn’t on the agenda in yesterday’s meeting.

The central bank’s decision to freeze the rate yesterday is largely underscored by the moderation of Korea’s inflation growth as of late, falling below the 4-percent level for the first time this year. According to Statistics Korea, in October Korea’s consumer prices jumped 3.9 percent from a year earlier, slowing down from the 4.3 percent on-year high in the previous month. The drop was mainly due to the overall price stabilization of agricultural product prices. Nevertheless, concerns still remain over high inflation and the Ministry of Strategy and Finance said last month that “fighting inflation remains a key priority for the government as prices are expected to soar significantly before the end of the year.”

The BOK’s monetary policy committee also said that it “expects the inflation rate to fluctuate at a high level for the time being given the factors such as the public utility charge hikes and stubbornly high inflation expectations,” hinting that the BOK is aware of the need to raise the rate as part of efforts to tame inflation. In the meantime, analysts presume the BOK will hold the rate for some time.

“Since there is growing uncertainty over the country’s growth outlooks, the BOK may hold the rate steady for a considerable period of time,” said Yoon Yeo-sam, an analyst at Daewoo Securities.