As golfer tees off, children cheer

As golfer tees off, children cheer 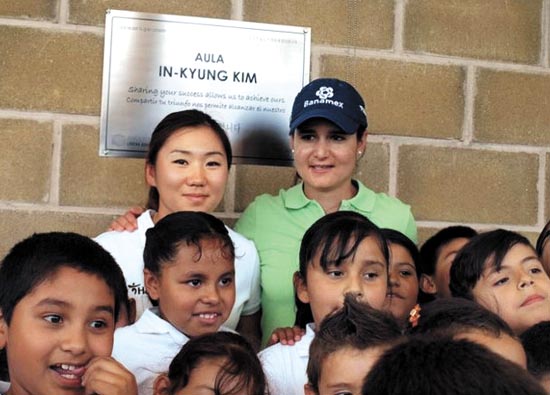 Golfer Kim In-kyung, back row, left, poses with Lorena Ochoa, right, and children in a classroom named after her, at a school for underprivileged children in Guadalajara, Mexico, in April. Provided by the LPGA


Koreans aren’t exactly familiar with Guadalajara, but dozens of children from the Mexican city know Korea. This weekend, they will be rooting for Korean golfer Kim In-kyung at the $1 million Lorena Ochoa Invitational, through Monday at the Guadalajara Country Club.

The children are students who attend a school run by the now retired Mexican golf heroine and tournament host Lorena Ochoa, 30. The school was created for children from lower-income families.

Kim, 23, who garnered her third LPGA title at last year’s event, donated her winnings from last year’s tournament, $220,000, to charity. Half went to the Lorena Ochoa Foundation and the remaining half to an American charity.

After news of the “kind Korean golfer” was reported, Kim became the second most famous female golfer in Mexico next to Ochoa.

The students said in unison they hope Kim will win again this year.

The school has a classroom named after her with posters saying, “Thank you, Kim In-kyung,” in Spanish and Korean.

Kim visited the school in April, where she taught the children Korean and played the guitar.

“I want to continue helping the kids,” she said.

Ochoa and Kim were not really close, Kim said, which is why when Kim offered to donate the money to the foundation, Ochoa asked many times if she was truly willing to do so.

“Ochoa is such a humble player, despite her excellent ability,” said Kim. “I decided to make a donation because she looks so beautiful taking care of unprivileged children.”

Ochoa and her brother later sent Kim a letter, saying, “We truly are grateful to you. Please feel free to come to Mexico, now that the country has become your second home.”

Ochoa’s brother Alejandro is a mountain climber who conquered Mount Everest in 2003, when Ochoa won her first LPGA Tour title.

Ochoa, the first Mexican golfer of either gender to be ranked number one in the world, retired last year to focus on her family and charity work. Now she is pregnant with her first baby.

The Lorena Ochoa Invitational is a women’s professional golf tournament on the LPGA Tour. Hosted by Ochoa, the event debuted in November 2008 at the course where she learned to play.

The tournament continues until Monday.