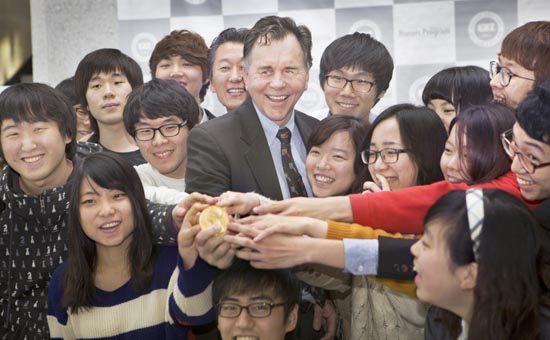 Students of the Hanyang University Honors Program in Science crowd around for a rare photo opportunity with Nobel Laureate Dr. Barry Marshall, who discovered Helicobacter pylori in 1982, and is visiting Korea for the first time since 2007. By Park Sang-mun


While Dr. Barry J. Marshall is known internationally for being a Nobel Laureate, in Korea he may be best known for being the face of a yogurt brand from Korea Yakult Company.

Marshall, 60, is an Australian physician who, with fellow Australian pathologist Dr. J. Robin Warren, became the 2005 joint recipient of the Nobel Prize for Physiology or Medicine in recognition of their 1982 discovery of Helicobacter pylori, a bacterium found in the stomach now considered to be the cause of most gastric ulcers and chronic gastritis, and has also been linked to increased risks of stomach cancer.

For Hanyang University students and professors, Marshall conducted himself like a science version of a rock star. After Marshall’s lecture at the university on Nov. 3, students took advantage of a photo opportunity with the Nobel Laureate and flocked around him for his signature.

In light of the 50th anniversary of diplomatic ties between Korea and Australia, Marshall returned to Korea for the first time in almost five years and spent four days, between Nov. 1-4, here. On Nov. 2, he gave out the Barry Marshall Daejeon Scholarship to two Daejeon Science High School students to study at the University of Western Australia. The scholarship was first established in 2007 and until now there have been 10 students from the high school honored with the award.

Marshall also spoke at science and technology institutes, Kaist and Postech. The following day, he visited the National Research Foundation of Korea in Seoul and held a lecture at Hanyang University Honors Program at the College of Natural Sciences entitled “The Road to the Nobel Prize and Beyond: Man versus Helicobacter pylori.”

In an exclusive interview with the Korea JoongAng Daily on Nov. 3 regarding his impression of Korean students, Marshall said he has seen some changes over the years.

“Students used to be shy in Asia, including Korea, but now they’re quite enthusiastic and ask a lot of questions.”

When asked what the strangest question he was asked, Marshall replied with a chuckle, “A student asked me, ‘Dr. Marshall, what did your wife say when you drank the bacteria - was she horrified?’” His answer was, “She was, and said she would be very upset if I didn’t take antibodies right away.”

In 1984, Marshall drank culture H. pylori from a Petri dish, developed gastritis in five days and cured himself with antibodies in three weeks. After a slight pause, he said, “In retrospect it was very selfish of me because I have a wife and four children.” However, his gamble was the impetus for worldwide acceptance that H. pylori indeed was the cause of stomach ulcers.

Dr. Barry Marshall became a Korean household name with his campaign for Korea Yakult Company Ltd.’s probiotic yogurt drink “Will” from 2001 to 2006, which advertised the product as being helpful in treating H. pylori. Yakult hit a marketing jackpot as the doctor went on to receive the Nobel Prize in 2005. The doctor admitted, “I was a little shy about something that seemed a bit commercial, especially as a scientist, but the advantage of it was that everybody asked, ‘what is that?’ Even grandparents knew that such a bacterium exists and could be linked to stomach trouble.”

Though Marshall concedes that there have not been extensive studies to demonstrate how effective Yakult is in curing H. pylori, as it is does not replace taking the proper antibodies, the company is in the process of developing a stronger product. He stated the yogurt drink “doesn’t cure but can help” in treating H. pylori, as it contains egg yolk immunoglobulin that fights against the bacterium. During his Hanyang lecture, Marshall remarked, “In the food business, you don’t need a lot of data,” eliciting laughter from the students.

The bacterium affects about 50 percent of the global population and is especially resilient as it lives in the thick mucus lining within the stomach which protects the stomach from harsh gastric acids, making it difficult to completely eradicate H. pylori. Marshall, with Ondek Ltd., an Australian biotech company he founded in 2005, is currently in the process of developing an innovative food product based vaccine platform using genetically modified H. pylori bacteria. However, Marshall conceded, “It’ll be another 10 years before you see a product,” especially since the already existing companies marketing vaccines will be resistant to a new product.

A self-professed engineering and technology junkie who blogs and uses Twitter, Marshall revealed his smartphone in a 3-D hologram Angry Bird case and said, “The future of medicine is in the use of technology to initiate medical systems. Currently, we go to a doctor. In the future, people will be able to just test at home for a diagnosis. On an iPhone app, or an Android app, you can answer a few questions, do a saliva or urine sample, and get an accurate diagnosis.”