S&J CEO tries to learn from his past mistakes

S&J CEO tries to learn from his past mistakes 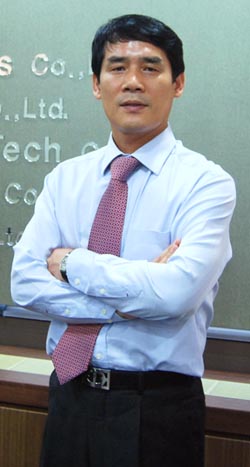 Kim Seong-yeol, CEO of S&J Provided by the company

When the Asia-Pacific Economic Cooperation (APEC) forum kicked off in Busan in 2005 what was in the hands of delegates during the official dinner wasn’t a glass of wine. They instead had Cheonnyeon Yaksok, a traditional mushroom liquor product as the official toasting drink.

Kim Seong-yeol, the businessman who created the drink, received awards in recognition for his pioneering mushroom liquor.

But his life turned upside down three years ago when he was forced to sell his company due to a declining economy.

Kim managed to turn things around and made a comeback in the industry with his new product, Well Cho (the official English name of the product is Fruit VNX), a fermented fruit drink.

In October, the United Nations International School located in New York City signed a supply contract with Kim’s company for providing Fruit VNX for school meals starting next year. Kim said the contract is worth 750 million won a year.

After Cheonnyeon Yaksok was designated as APEC 2005’s official toasting drink, sales of the product went up 1,000 percent for the year. Kim’s company couldn’t meet the skyrocketing demand.

To barely meet the demand, he confessed he had to sacrifice the quality of the drink, sometimes sending out hot drinks fresh from the factories in bottles without cooling them.

His company even failed to deliver required amounts of orders. His clients started to turn away but Kim took out 12 billion won in loans from banks to build a second factory.

When sales of Cheonnyeon Yasok went down in 2007, he insisted on adding more promotional events. It was beyond his means and his business collapsed.

“I bit off more than I could chew,” Kim said. “When I started a new business in 2008, I was determined not to repeat that mistake.”

Kim established S&J Food in 2008 and developed Well Cho by partnering up with Seo Kwon-il, a nutrition professor at Suncheon National University in 2009.

Kim’s product is now sold at three local discount chains, E-Mart, Homeplus and Lotte Mart. Kim said it’s not yet time for his company to aggressively expand his business into the overseas market.

When asked what he has been doing since his first business collapsed, Kim said he spent six months reading books about the world’s 100 richest business men.

He learned from the books that none of the rich men succeeded without failing.

“Cheonnyeon Yaksok wasn’t a failure. It was a path to success,” Kim said.