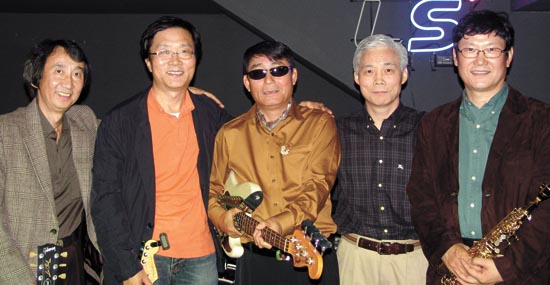 
Sand Pebbles, the famed student band at Seoul National University, will hold its 40th anniversary concert at the SNU Culture Center today at 3 p.m., bringing together its alumni and the band’s current members.

Formed in 1970 by SNU agriculture students, Sand Pebbles earned national recognition in 1977 when their then-six member lineup won the grand prize at the first MBC College Song Festival for their song, “What Should I Do,” which became a hit.

Over the past 40 years, the band, which has a new lineup of current students each year, has performed over 1,000 concerts, filmed commercials and won numerous music awards.

Professor Kim Jun-ho of Gangwon University, who was the guitarist in the band’s seventh lineup, took charge of directing this year’s anniversary concert, a year that has special meaning for Kim because it’s when “the founding members reach retirement age.”

“As usual, the older alumni hold a great passion for music and are composing and practicing a new song,” Kim said.

Last month, Sand Pebbles alumni even held an audition to check out each other’s skills. For the 40th anniversary, some 40 members from the first through 39th lineups will be represented, performing a variety of genres over the two and a half hours, including oldies like “California Dreaming,” hard rock and metal.

The set list includes the hit “What Should I Do” by all members of the band’s sixth lineup, the song’s composer Kim Chang-hoon and founding member Yoon Jang-bae on bass, who is the former president of the Korea Agro-Fisheries Trade Corporation.

Current members of Sand Pebbles have also been rehearsing hard, practicing for three hours a day.

“My parents were happy when they heard I joined Sand Pebbles,” said Park Un-I, 19, keyboardist for the newest generation. Park added with a laugh, “When the class of 1973 see us, the class of 2011, it’s like us seeing the class of 2050.”

Over the past 40 years, Sand Pebbles has had 196 members.

“It’s rare that a college club continues for this long and keeps performing,” said Professor Lee Young-deuk of Daegu University, who was leader of the band’s sixth lineup. “Of our alumni, nobody became a 100-percent celebrity, but it’s unique that we became professors, CEOs and other occupations and enjoy [music] as amateurs.”