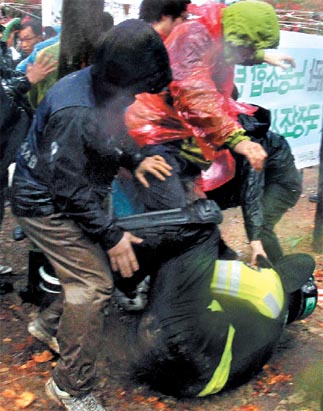 Police are looking for four protesters who assaulted a police officer at an anti-Korea-U.S. FTA rally on Thursday that became violent after law enforcement moved in to stop the illegal demonstration.

The attack happened around 4 p.m. after Officer Jeon Jin-uk, 31, apprehended the leader of the protest when four protesters began to kick him.

The officer fell to the ground, which was slick with wet leaves, as the assailants continued to kick him. They also punched him in the head twice and attempted to remove the officer’s helmet. Fellow officers came over and removed Jeon from the scene.

“I didn’t know what to do. I thought I had to stand up and get out of there,” said Jeon, who suffered a neck injury in the attack.

The incident occurred at an illegal rally in front of Korea Development Bank in Yeouido, western Seoul, on Thursday afternoon, where about 800 gathered to protest the free trade agreement with the United States and oppose the deal’s provision on investor-state dispute settlements (ISD).

Police said they planned to charge the attackers, who appeared to be in their 20s, with interfering with public affairs and ask for a five-year sentence or a fine of 10 million won ($8,869).

“We obtained a photo of the scene, so we will pursue the protesters who attacked the officer until we find them,” a police official said.

Cho Hyun-oh, commissioner of the National Police Agency, was infuriated by the incident. “It shouldn’t happen that a police officer in charge of law enforcement is beaten [by citizens],” Cho said yesterday. “We will immediately arrest the demonstrators who attacked him and charge them.”

The commissioner also said authorities would crack down on violent rallies. “Using all measures and equipment, we will strictly respond to any aggressive, violent protests within the boundary of the law,” he said.

Police in Yeongdeungpo, where Yeouido is located, told the JoongAng Ilbo yesterday that they would form a special team for controlling and arresting violent demonstrators.

A total of 11 protesters were arrested at Thursday’s rally after resisting police orders to disperse. At 3:40 p.m., protesters began moving from the bank toward Grand National Party headquarters and clashed with roughly 4,000 police officers who used water cannons on them. The 11 protesters, including two female college students and a Democratic Labor Party member, are being questioned by police but are exercising their right to remain silent.

In the evening, around 500 people from another civic group started a candlelight vigil in front of the same bank. Although the vigil had a permit from the Seoul Metropolitan Government, police said it became illegal after demonstrators went beyond what they received permission to do.

When police ordered the demonstration to shut down, two lawyers from liberal civic group Lawyers for Democratic Society began scuffling with riot police.

“This is not a republic of police forces. We will accuse you of interfering with a legally reported rally,” one of the lawyers said. The scuffle lasted for about 10 minutes.