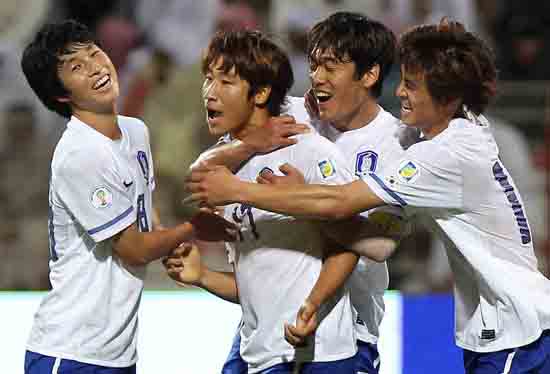 Korean forward Lee Keun-ho, second from left, celebrates with teammates after scoring a goal against the United Arab Emirates during their third round Asian qualifiers for the 2014 FIFA World Cup at Al-Rashid Stadium in Dubai on Friday. [YONHAP]

Forward Lee Keun-ho said he is ready to step up his performance during the next FIFA World Cup Asian qualifier, hoping to continue the goal-scoring touches he showed last week.

Lee, who plays for Japanese club Gamba Osaka, was the player who broke a late 0-0 deadlock against the United Arab Emirates on Friday at Al-Rashid Stadium in Abu Dhabi, striking first in what would end as a 2-0 victory.

“It’s been a long time since I’ve scored in an international match,” Lee said. “I just played 10 minutes in the last game, but what’s important for me is to continue my goal touches.”

With Lee’s opener and an additional goal from team captain and Arsenal striker Park Chu-young during second-half extra time, Korea won 2-0 against the UAE and secured its top position in Group B with 10 points at the third round of the qualifiers.

Korea now faces Lebanon tomorrow and a victory will confirm its pass to the final round of the qualifiers.

For Lee, tomorrow’s match is going to be another great opportunity to level up his status on the national team.

Coach Cho Kwang-rae already said over the weekend that he will play Lee as the top striker for the match against Lebanon since Sunderland forward Ji Dong-won is not in good form and Park can’t play in tomorrow’s match after receiving his second yellow card of the qualifiers.

Lee, who has played 38 matches for Korea, has been considered one of the unfortunate players on the national team, missing major tournaments at the final moment.

The former Daegu FC striker failed to make the final roster of the 2010 World Cup despite participating in the final national team training session in Austria. In January, Lee also couldn’t play with the Taeguk Warriors in the AFC Asian Cup.

However, Lee has been working hard to bounce back, scoring 12 goals for his club in the J-League this season, while accepting his role as a substitute member in the national team.

Although his goal against UAE puts him back to the spotlight, Lee said he will not be too hyped up.

“It’s kind of pressure to say I’m good after I scored just a goal,” Lee said. “I don’t want to be a one-hit wonder, so I will prepare myself calmly.”