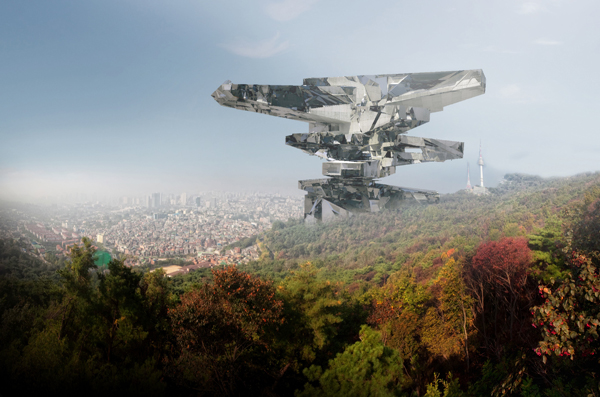 Australian artist Ash Keating’s “Zi Namsan Plus” (2011) is part of “City Within the City” at the Artsonje Center.

The Land Down Under wants to be known for more than its natural spectacles and wildlife, putting on several exhibitions of Australian artists in Korea this year, which marks the 50th anniversary of diplomatic relations between the two countries.

With the end of the year fast approaching, three new exhibitions featuring both Korean and Australian artists recently opened in and around Seoul.

One of them is “City Within the City,” which started on Saturday at the Artsonje Center in the art zone east of Gyeongbok Palace in central Seoul.

A collaboration between the gallery and Gertrude Contemporary in Melbourne, the exhibition focuses on urbanism - something the two countries and any other industrialized country share. Accordingly, represented among the 17 participating teams of artists are Mexico, Lebanon and China as well as Korea and Australia.

Korean artist Yeesookyung’s film “Our Tryst Has Been Delayed,” top, and Australian artist Christian Thompson’s film “Gamu Mambu (Blood Song),” above, are part of “Tell Me Tell Me” at MOCA. Provided by the galleries.

One of the eye-catching works is Melbourne-based artist Ash Keating’s “Zi Namsan Plus” (2011). It is a computer graphic-generated image, hanging on a replica of a construction site fence, of a futuristic building on the slope of Mount Namsan in central Seoul. “Zi” in the title originates from the well-known Korean apartment brand “Xi.” It is a sort of parody of the renderings of future apartments that hang on fences at apartment construction sites, a common sight in Korea’s metropolitan areas.

Keating told reporters on Thursday that he got inspiration when he visited a gallery in a Xi apartment complex during his stay in Korea in 2008 for a residency program.

Curators of the exhibition explained that Keating deals with “realistic problems including sustainability of cities sometimes in surrealistic ways” as seen in the image of a ultra-futuristic apartment building invading the Mount Namsan area.

Among the works is Korean artist Jung Yeon-doo’s photo project “Southern Rainbow Seoul” (2011). It is a series of portraits of families living in a Seoul apartment complex, taken in their units at the same angle.

“The images not only portray how different people inhabit similarly structured spaces but also work as a means of communication in the complex cities we inhabit by bringing together neighbors that given their schedules rarely have occasion to meet,” Artsonje said in a release.

Meanwhile, the “Tell Me Tell Me: Australian and Korean Art 1976- 2011” exhibition is now in Korea after opening in a Sydney suburb this summer.

According to the museums, the show is inspired by Korean-born video art pioneer Paik Nam-june’s 1976 visit to Sydney and the 1976 Biennale of Sydney, in which some Korean artists including minimalist Lee Ufan participated.

The exhibition includes Paik’s video art “Zen for TV” from MOCA. It also shows Lee’s “Situation,” an installation of stone and electric light that gives off the atmosphere of Zen philosophy.

Among other Korean artists’ works is the sculptor and painter Yeesookyung’s film “Our Tryst Has Been Delayed.” It features a singer in a simple white setting who sings jeongga, a traditional song genre whose audience was the aristocracy of the Joseon Dynasty (1392-1910).

The film is comparable to the Australian artist Christian Thompson’s work that is also in the exhibition. Thompson’s film, titled “Gamu Mambu (Blood Song),” features a singer who sings a traditional song of a native Australian tribe in Western Baroque style. The film shows the identity of Australia, while Yeesookyung’s film tells that of Korea.