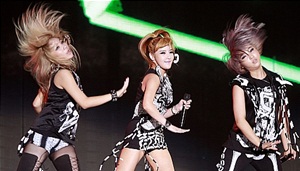 According to MTV IGGY, the K-pop band edged out nine other bands, such as Venezuela’s La Vida Boheme, Pakistan’s Atif Aslam, Malaysia’s Yuna and the United States’ Skrillex.

The channel said that more than four million fans from 168 countries participated in the online vote, which started early last month.

According to MTV IGGY, the four-member group has demonstrated a wide fan base across the world, saying that more fans in the United States and the Philippines voted for the group than in Korea.

The network also praised 2NE1 for breaking out of “the girlie/sexy/cute female K-pop stereotype,” on their Web site www.mtviggy.com.

“This result is special that it was achieved through 2NE1’s music and the support of all fans around the world,” YG Entertainment, 2NE1’s label, said. “It will be a big boost for 2NE1 to perform in the United States.”

YG Entertainment announced that 2NE1 will perform at MTV in New York’s Times Square on Dec. 12 to commemorate its win. The performance will also be broadcast on MTV.