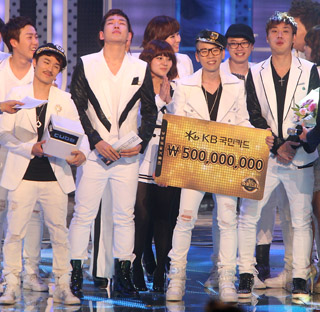 Joy and tears shared the stage as Lim Yoon-taek and his quartet won the top prize on “Superstar K,” the Korean equivalent of “American Idol,” ending a quest that captured the hearts of the nation after Lim, the group leader, revealed he had stomach cancer.

The slim, bespectacled Lim, 32, had grown thinner and lost his hair as the contest wore on and his stage-four cancer took a toll. Doctors said the disease had spread throughout his body and warned the group to prepare for the worst.

Lim and his fellow band members cheered and embraced, some wiping away tears, after the judges proclaimed them the winners to the screams of nearly 7,000 audience members. 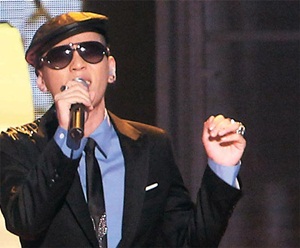 Afterwards Lim, who revealed his illness in September when asked by a judge why his hair was so short, and had his stomach and duodenum removed in June during the preliminary stages of the contest, said he tried to make every day count.

“There’s only one thing - being positive. You don’t know how or when life ends,” he told reporters. “It’s better to live as if every day is your last.”

One of the two songs the group sang for their prize-winning performance was about sending a lover away. The other was a fast, upbeat number that ended with a solo break dance by Lim, who has lost 7 kilograms (15.5 pounds) since July.

Since weekly live broadcasts of the show began in September, Lim and the group practiced furiously and said they got no more than a scant two hours of sleep on most nights.

“We really worked hard. I didn’t devote my energy to the contest just because I am sick,” Lim said.

Lim’s fellow band members, who are also friends of long standing, said earlier that if they scooped the top prize of 500 million won ($442,000) - minus costs for recording an album - they would use it for his medical costs.

Lim’s determination drew the admiration and sympathy of many across the country, where celebrities tend to conceal their illness if they have cancer.

“The Western Sky,” which the group sang on the program several weeks ago, became the single most downloaded song on Naver, the Korean equivalent of Google, and is at the top of Billboard’s K-Pop 100.

“Who knew [Ulala Session] would sing a miracle? Ulala Session, I really want you to be with us forever,” said judge Lee Seung-chul.

But after their victory, Lim played down his condition and said that in fact he’d gained energy from the show. Still, he underwent weekly checkups.

“Video clips look like I am very sick but my face is naturally white .?.?. I am healthy,” he said, smiling.

For some of the fans who packed the studio, bringing yellow balloons to show support, winning was only part of the story.

“I can feel his heart without words,” said Im Jae-yeon, a 47-year-old homemaker, before the show. “Winning is not important. I hope this will slow down his disease and make him happy.” Reuters