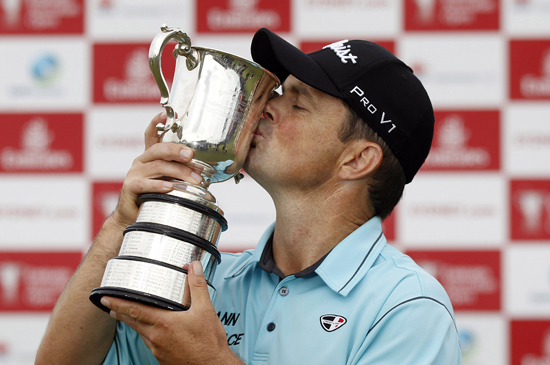 SYDNEY, Australia - Local-born Greg Chalmers shot a three-under-par 69 to win his second Australian Open by one stroke yesterday as Tiger Woods came up just short in his quest to end his two-year title drought.

Chalmers was made to sweat in the clubhouse as his compatriot John Senden went close with a 35-foot birdie putt at the 18th that would have forced a playoff but ultimately his total of 13-under was enough to secure the Stonehaven Cup.

A day shy of the second anniversary of his 95th and last title win at the 2009 Australian Masters, Woods came from six shots back to hit an eagle and five birdies for a 67 and third place on 11-under.

“It could have been really low today, a couple of drives on the back nine cost me,” the 35-year-old Woods said. “I fought real hard all day but it looks as though I’ve come up just short.

“I’m just going to keep plugging along,” added the 14-times major winner. “It’s just nice to be playing and not on the sidelines.”

An emotional Chalmers, who first won the title in 1998, fought back tears after beating a field including eight of the world’s top 20, who had travelled to Australia to prepare for next week’s Presidents Cup in Melbourne.

“You can stumble into it once but to win it again, in this field, one of the strongest we’ve had in Australian golf for a long time, that does something for me - that really floats my boat.

The Western Australia-based world number 215 started the day with birdies on his first two holes and held at least a share of the lead for the remainder of his round.

The lefthander stuttered with two bogies before the turn, but he sandwiched a birdie between them and two more in a flawless back nine put him in the clubhouse with a two-shot lead.

Chalmers said he had spotted Woods moving up the leaderboard and heard the roar ahead of him when the American chipped in for an eagle at the 14th hole.

“I was aware of what Tiger was doing, but I also knew I had birdie holes coming up,” he said. “I thought he would have to make another eagle or birdie one of the harder holes.”

Overnight leader Senden made a calamitous start with four bogeys in his first seven holes and his hopes of a second title to go along with his 2006 triumph looked all but gone at the turn.

He stormed back with four birdies over the back nine, and having missed his putt on the final green by inches, finished with a 72 to stand at 12-under for the tournament.

Defending champion Geoff Ogilvy shot the best round of the day with a 65 to take a share of fourth place on nine-under with compatriots Adam Scott (68), Jason Day (74) and Nick O’Hern (72) as well as American Nick Watney (72).

World No. 7 Day also made a poor start, finding the water at the first and the sandy rough at the third to drop two shots. Reuters