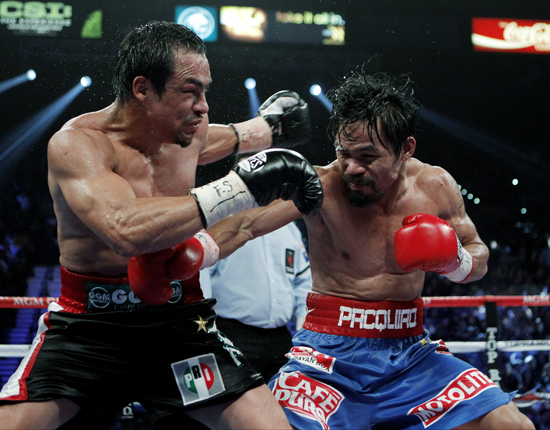 Two judges handed Pacquiao the victory by margins of 116-112 and 115-113 while the third scored the fight a 114-114 draw, giving the Asian southpaw two triumphs and a draw against Marquez and possibly a rematch with him next May.

“It was clear to me that I won. I clearly won,” Pacquiao said. But the result prompted a chorus of boos from Marquez supporters so loud that Pacquiao’s post-fight comments into a microphone could not be heard, a harsh end to an exchange-filled fight that drew cheers from start to finish.

“The fans are fans of Marquez. I understand how they feel,” Pacquiao said. “But I blocked a lot of his punches. He’s a counter puncher. He head-butted me a lot.”

Marquez’s claims he truly won a 2004 draw with Pacquiao and a narrow one-point loss in a 2008 rematch helped create the third fight and his shouts that he was robbed yet again could set the stage for a fourth fight.

“The second robbery of the two losses. This was the worst,” Marquez said through a translator. “We won with clearer punches.”

Marquez raised his right hand in victory after the final round, only to be denied yet again.

“This was a robbery of the utmost,” added Marquez’s trainer Ignacio Beristain. A flurry-filled fight that was electrifying in the later rounds created a bitter ending that had promoter Bob Arum saying he would use a rematch clause in the contract.

“I’m going to try and make this rematch in May of 2012,” Arum said. “I’m bound and determined to find a definitive winner once and for all.” That’s fine with Pacquiao. “I’m all for it,” he said.

Pacquiao, who has not lost since 2005, improved to 54-3 with two drawn and kept his World Boxing Organization welterweight title while Marquez fell to 53-6 with one drawn despite an electrifying performance.

Marquez’s claim that he won both prior Pacquiao fights was disrespect that prodded Pacquiao to train with unprecedented passion and call this bout of his most important fights, vowing to prove that he was indeed the better boxer.

Instead, it might take four to settle the score of which fighter is best.

“What can I say? It was a real close fight,” Pacquiao trainer Freddie Roach said.

Pacquiao, a world champion in a record eight weight divisions in his career, denied Marquez a title in his fourth different weight class.

Pacquiao, considered boxing’s pound-for-pound king, has been unable to make a deal for a much-sought megafight against unbeaten U.S. star Floyd Mayweather, but outside of Marquez he has dispatched most rivals in overpowering fashion.

Marquez, six years older than Pacquiao at 38, added size in a bid to produce greater power without sacrificing speed.

Furious flurries had spectators on their feet in the ninth, a round in which Marquez took a pounding to escape the ropes and Pacquiao fired quickly and aggressively, and the 10th, when each fighter attacked at will.

One spectacular exchange in the 10th saw each land a hard right to his rival’s chin at the same moment and their heads clash seconds later.

In the 12th round, a cautious start gave way to several exchanges but no major blows for either man. Pacquiao and Marquez tested each other in a cautious first round, each sizing up the other in search of an opening but finding little as spectators screamed in support of both fighters, a buzz constant throughout the fight.

Each wary of the danger in his foe’s fists, Marquez and Pacquiao exchanged only a few more blows in round two, Pacquiao showing speed but Marquez landing well at times as tension mounted.

Pacquiao ended the third round with his best flurry to that point but Marquez answered in the fourth with a hard right to Pacquiao’s chest and a stinging right to his jaw late in the round.

By the end of the seventh, their furious exchanges had the crowd standing and roaring in delight.