Jeju named one of world’s 7 wonders

Jeju named one of world’s 7 wonders 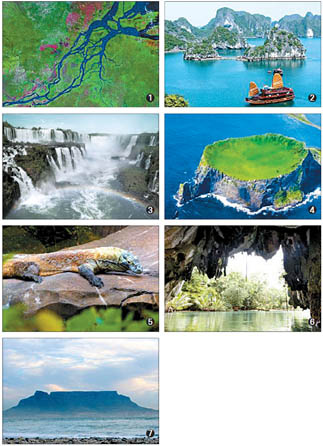 After a yearlong campaign to be named one of the new seven wonders of the natural world, big shots on Jeju Island gathered in suspense Saturday to hear if they succeeded.

And when the good news was announced, the island went into celebration mode.

Early Saturday morning, more than 1,000 islanders and members of the Jeju campaign, including former Prime Minister Chung Un-chan, chair of the National Committee for Jeju New7Wonders, Jeju Governor Woo Keun-min and Minister of Culture, Sports and Tourism Choe Kwang-sik, gathered anxiously at the Jeju Arts Center for the long-awaited announcement.

The provisional winners were announced on the New7Wonders Web site by Bernard Weber, founder and president of New7Wonders Foundation, from its headquarters in Zurich at 4:07 a.m. Korean time.

Announced in alphabetical order, Jeju Island made it into the top seven, beating out contenders such as the Grand Canyon in the United States and the Dead Sea in Israel.

“I give my thanks to the citizens, the islanders and Koreans abroad who have lent their plentiful support until now,” said Woo Keun-min, governor of Jeju Island.

The bid was also supported by President Lee Myung-bak and Korean entertainment figures.

Chung said he hoped the selection of Jeju could bolster both Jeju and Korea’s image in the world.

“Most of all, the tourism revenues in Jeju will sharply increase and other regions of South Korea will have related effects,” he said.

The Jeju Development Institute projects that there will be an increase of 73.6 percent in foreign tourists and 8.5 percent in Korean tourists.

The institute predicts that the increase in tourism will boost the local economy by as much as 1.2 trillion won ($1.1 billion).

The campaign has met with some criticism after rumors circulated that the promotion costs for Jeju in the New7Wonders competition ran as high as 30 billion won.

Some Korean netizens yesterday questioned the results announced Saturday because the organizers of the campaign allowed people to vote by Internet and phone without restricting duplications.

The New7Wonders Foundation said it would check and validate the voting, and each winner will be confirmed and officially inaugurated in early 2012.

Jeju authorities claimed there was little likelihood of change in the results.

“As an event with over 1 billion participants globally, the important aspect is that ‘South Korea’s Jeju Island’ is a name that has been publicized for over four years,” Woo said. “Through this process, Jeju Island and Korea have already experienced significant promotion.”