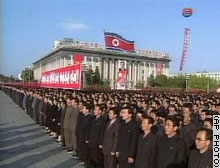 Hundreds of North Korean nuclear and missile experts have been collaborating with their Iranian counterparts in more than 10 locations across the Islamic state, a diplomatic source said yesterday.

The revelation lends credence to long-held suspicions that North Korea was helping Iran with a secret nuclear and missile program.

It also represents a new security challenge to the international community as it seeks to curb the nuclear ambitions of Pyongyang and Tehran and thwart trading of nuclear and missile technology.

North Korea has long been suspected of being behind nuclear and missile proliferation in Iran, Syria, Myanmar and Pakistan.

“Hundreds of North Korean nuclear and missile engineers and scientists have been working at more than 10 sites (in Iran), including Natanz and Qom,” the source said, citing human intelligence he declined to identify for security reasons.

The source would not allow the specific number of North Koreans to be published, citing the sensitivity of the intelligence, and would not give further details on the extent of the collaboration. The source spoke on condition of anonymity because of the delicate nature of the issue.

Repeated attempts to contact the Iranian embassy in Seoul by telephone were unsuccessful.

North Korea - which conducted two nuclear tests in 2006 and 2009 - revealed a year ago that it is running a uranium enrichment facility. Highly enriched uranium can be used to make weapons, providing Pyongyang with a second way of building nuclear bombs in addition to its existing plutonium program.

Both North Korea and Iran are under United Nations sanctions for their nuclear programs. The North has expressed interest in rejoining international disarmament talks it walked away from in 2009.

The IAEA said in its report that it believes the country “has carried out activities relevant to the development of a nuclear explosive device” under a “structured program” until 2003, and “some activities may still be ongoing.”

The source, with access to intelligence on the years-long weapons collaboration between Pyongyang and Tehran, said the North Koreans are visiting Iran via third countries and many of them are being rotated in every three to six months.

The North Korean experts are from the country’s so-called Office 99, which is directly supervised by the North’s ruling Workers’ Party Munitions Industry Department. The bureau is widely believed to be engaged in exports of weapons and military technology.

“It’s not a matter that the government can officially confirm,” another government official said.

The official added that nuclear cooperation between North Korea and Iran has not been confirmed, though the countries have cooperated on missiles. The two officials asked not to be identified, citing office policy.

The Associated Press reported late last year that Mohammad Reza Heydari, a former Iranian diplomat in charge of airports who defected to the West earlier in 2010, said he saw many North Korean technicians repeatedly travel to Iran between 2002 and 2007 to work on the country’s nuclear program.